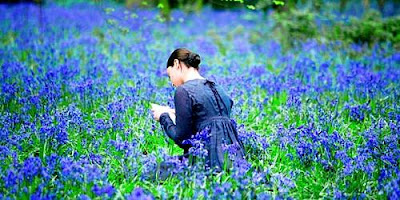 Period pieces tend to be very somber affairs, full of repressed passions and strict social rules. Jane Campion’s new film Bright Star, though anchored by a thread of restrained eroticism and shaped by the tragic circumstances of the poet John Keats, is a surprisingly joyful movie, matching light for dark at every turn. It is a beautiful looking and beautifully rendered piece that hits all the right notes and features a terrific and engaging lead performance from Abbie Cornish.

Cornish stars as Fanny Brawne, the woman to whom Keats (Ben Wishaw) was loosely engaged at the time of his death. I say “loosely” because it seems apparent to everyone that Keats will not live to marry her and that that is why the engagement has been allowed at all. Underappreciated in his own time, Keats is in no financial position to take a wife, though in a different era Fanny herself could have supported them through her work as a designer and seamstress. Throughout the film she’s shown sewing and embroidering and she delights in revealing to people that she’s made her dresses herself and points out the various stylistic innovations she’s created. The costumes in the film (both Fanny’s and those of the other characters) are indeed exquisite and come courtesy of Janet Patterson who also did the costumes for Campion’s The Piano and The Portrait of a Lady.

Fanny and Keats are introduced through the poet Charles Brown (Paul Schneider), who is a neighbor to the Brawnes’ and a friend to Keats. Fanny and Brown have a contentious relationship defined by a dislike for each other that, were it not for Keats, may have evolved in the manner of Elizabeth Bennett and Mr. Darcy. Instead Fanny and Brown fight for Keats’ attention with Fanny winning, though perhaps only by default. Brown’s affection for Keats is not romantic but rather stems from his recognition of Keats’ superior abilities and his desire to see those abilities appreciated by others. Brown’s devotion is less to the man than it is to the man’s gift as an artist and his admission near the end, when he repeats “I failed John Keats!” is wrenching. Schneider is perfect in this role and brings an edge to it that balances the film and keeps it from dipping into sentimentality.

Of course, the driving force of the film is Cornish, who makes Fanny into a lively and clever heroine, but also one plagued by insecurities and doubt. Fanny excels at a certain plane of social interaction – flirting, as Brown condescendingly points out to Keats – but is occasionally at a loss when a situation calls for a different tenor. At one point Keats asks her if she’s in love with Brown. The answer is no but she stands there dumbstruck, unable to engage with him in this way. As the film progresses, however, she gradually matures so that we believe that the girl who started the film thinking poetry a somewhat useless exercise can now recite Keats’ verses with an appropriate amount of gravitas and feeling. She and Wishaw (who, it must be noted, gets to do little more than alternate between looking lovelorn and sickly) have a nice chemistry, though to be honest there’s more fire between Cornish and Schneider. Still, it’s believable enough that losing Keats would inspire her to spend the rest of her days walking the same paths she walked with him as the film gives their relationship enough space to really develop and evolve.

As a filmmaker, Campion is someone I tend to run hot and cold on, finding that sometimes she uses a mallet where a hammer would suffice. With this film, however, she seems to exercise a great deal of restraint, largely letting the images speak for themselves rather than underscoring them with an overbearing narrative commentary to make sure that you get it. One thing I always find praise worthy about her work is the way that they look, and her period pieces in particular tend to be realized with what I would describe as a painter’s aesthetic, rich in color and finely contrasted. This film looks gorgeous and has a haunting quality that deepens its impact. It's a beautiful, wonderful film.

Hi good review. I agree with much of it!