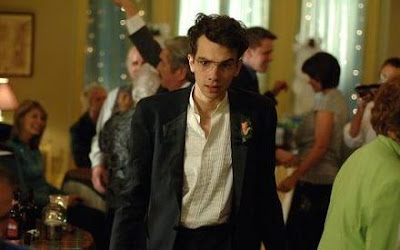 Boy meets Girl. Boy wants Girl. Boy accidentally kills first one man and then another. Girl comes up with the idea to start killing people on purpose – after all, at this point he might as well. Just Buried is not a horror film, though it has some startlingly grotesque moments, but a very black comedy about two people who get into a very bad habit and at a certain point cease to see what they’re doing as criminal and think of it as mere necessity.

The Boy is Oliver Whynacht (pronounced “Why not”) and is played by Jay Baruchel, who usually plays the gangly sidekick in Hollywood movies and the gangly hero in indies. The Girl is Roberta and is played by Rose Byrne, which should tell you just about everything you need to know about how she talks him into killing people on purpose. The two are brought together by the death of Oliver’s father, who was also Roberta’s employer. The senior Whynacht leaves his funeral parlor to Oliver, not because the two were close (they hadn’t seen each other in years), but because from what he can tell Oliver has done nothing with his life. Oliver does not slip easily into his role as boss: on his first day he wanders out of his office to ask the groundskeeper/secretary/accountant Henry (Graham Greene) what, exactly, he should be doing in his capacity as boss.

After a night of drinking, Oliver hits a man walking along the road with his truck. Roberta helps him move the body, tells him where to dump it, and then advises him about what to do with his truck. If Oliver weren’t so panicked, one might expect him to question how Roberta knows so much about getting rid of evidence and consider it with the fact that Roberta was the one who told him he was fine to drive in the first place, reasoning that everyone in town drives drunk. Fortunately for Oliver, Roberta is the town coroner in addition to being the funeral home embalmer, which means that she can record the official cause of the death as accidental. A second man is killed, again by accident, though his death is fortuitous as he was in possession of evidence that would prove the first death was not accidental. It is what happens after this second death that makes Oliver and Roberta decide to start actively killing people.

There are two funeral homes in town. The one that now belongs to Oliver (and, we learn, was once owned by Roberta’s mother), and one that moved into town a few years ago, set up shop near the old folks’ home, and has been ringing in business ever since. When the second corpse is claimed by the other funeral home, Oliver and Roberta decide to do the sensible thing and blow up the other funeral home (and its owner). Now they’re the only game in town and business is booming, though there remain questions about those first two deaths which necessitate more killing. Oh, and did I mention that murder acts as an aphrodisiac for Roberta? So… that worked out, then.

Just Buried isn’t an especially clever film, though it does have its moments and the actors approach the material in the spirit which was intended. It’s ultimately a very silly movie, particularly as it approaches its over the top, verging on soap operatic, finale. Is there any point to this movie? I don’t know. Maybe it was intended to be a parody of other “small town” movies where the fish out of water hero is baffled by his quirky new neighbors, only in this case the hero doesn’t learn to love those quirky neighbors and their quirky ways, but instead systematically kills them. Whatever its intention, the film works better than it probably should and the leads are engaging despite the story’s overall coldness.

He makes interesting choices. I think he's going to end up being a formidable actor as he gets older.