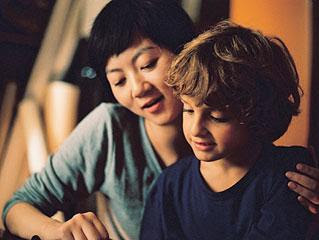 Hsiao-hsien Hou’s Flight of the Red Balloon is a gracefully directed film about a Paris family as seen from the perspective of an outsider. Based on Albert Lamorisse’s 1956 short film The Red Baloon, this new film glows with nostalgia and sadness as it follows the characters through the ordinary events of their lives and the extraordinary occurances of imagination. It's an absolutely lovely film, though one that's not likely to be to everyone's taste.

It must be stated first and foremost that this film is very slow moving and requires patience. Some will find it maddening because it goes “nowhere” while others will celebrate the film’s attention to ordinary, everyday details. Personally, I fell somewhere in between in that I liked the film’s careful study of the characters and their lives, but also wished at times that it would pick up the pace a bit. I would further venture to say that it would probably be helpful to see The Red Balloon prior to seeing this film. I’ve never seen that film but I did get the feeling that I would have gotten more out of this one if I had.

The film centres on Song (Fang Song), a Chinese student studying film in Paris. She takes a job as a nanny for young Simon (Simon Iteanu), whose mother Suzanne (Juliette Binoche) is burdened by many obligations due to the long absence of her husband. Slowly but surely, Song takes on an increasingly important role in the family, sharing with Simon a magical make-believe world that includes an ever-present red balloon, and becoming a confidante and friend to Suzanne.

Though the red balloon and Simon’s relationship to it are important aspects of the film as a whole, it is Suzanne and the details of her life – revealed to us gradually and naturally from Song’s perspective – which give weight and substance to the film. Suzanne’s husband has been away in Montreal for some time and may or may not come back. Her daughter, Louise, is currently living in Brussels but is expected to return to Paris shortly – an expectation which will end in disappointment for Suzanne. The tenant downstairs gives Suzanne no end of grief but removing him is problematic due to the agreement that was struck between himself and Suzanne’s husband. Between all these issues and her work obligations, Suzanne has no time for herself and little for Simon. In the final moments of the film Simon and his classmates look at a painting that they describe as being of a child with a red balloon and parents watching from a distance. The description also applies to Simon’s life, of course, as Suzanne’s problems drive her further and further away despite her desire to spend more time with him.

Binoche, an actress who consistently makes it look so easy that you forget just how good she is, carries the darker elements of the film and also incorporates moments of levity into her performance and character. My favourite scenes involve Suzanne’s work doing voice-overs for a puppet show in which Binoche gets so animated and into it that I honestly could have watched that for two hours. Her performance in this film is rich and engaging, moving seamlessly through a host of emotions as Suzanne struggles to keep things together though her candle burns at both ends. This is one of Binoche's better performances and for an actress of her caliber, that's really saying something.

The direction is unintrusive and measured, allowing us to simply observe the situation along with Song. Though the film doesn’t make too much of it, it does touch on East/West dynamics through Song’s relationship with Suzanne, highlighting the ways in which they see the world differently and doing so in a quiet, meditative way. Watching this film reminded me of Hemingway's iceberg theory of storytelling, wherein only the tip is explicitly stated while the body of the story remains subtextual. This method of storytelling requires more work on the part of the audience, but it also gives the story in question a stronger sense of realism. Flight of the Red Ballon is a film that mixes realism with a more magical, dreamlike quality and, to its infinite credit, does so successfully. My only qualm with the film is its pacing, which I found just a little bit frustrating.