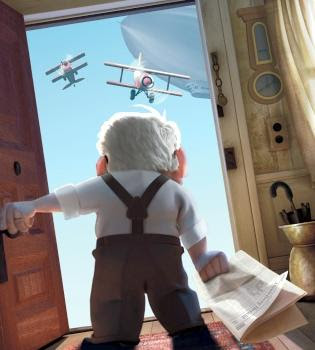 Unless you happen to live somewhere that mass media cannot reach you, you’re aware by now that Up is the latest weapon in Pixar’s scheme for world domination. If they keep making movies like this, it’ll be no contest. Given the general consensus on Terminator: Salvation maybe the thing to do to save the franchise is to reveal that Skynet is a front for Pixar and have John Connor battle to the death with Wall-E. Anyway… SQUIRREL!

Our hero in Up is a lovably cantankerous widower, Carl Frederickson, voiced by Ed Asner. We first meet Carl in the 1930s, when he’s a boy and idolizes Charles Muntz (Christopher Plummer), a once revered adventurer who enters into disgraced self-exile in the jungles of South America after being called a fraud. Carl forms a friendship with Ellie, a girl his age who also idolizes Muntz, and they grow up, get married and spend many happy decades together before Ellie grows ill and dies. The sequence showing Carl and Ellie’s life together is brief and wordless and generally quite devastating, the first hint that this film, nominally aimed at children, is going to enter some fairly dark territory. Although, having said that, I suppose I shouldn’t be surprised since some of the more scarring moments from my childhood came courtesy of “kids” movies (a few examples: Bambi’s mother, the ostracization of Rudolf, the fox and the hound no longer being allowed to be friends).

Carl clings to the past, trying desperately to preserve his life with Ellie even in her corporeal absence. When developers threaten to take his house and have him placed in a nursing home, Carl rigs his house with balloons and sails away only to discover that young Wilderness Explorer Russell is stuck on his porch, determined to earn his “assisting the elderly” badge so that he can move up the ranks. Together they sail to South America, specifically to Paradise Falls, “the land that time forgot” and also the name of a deliciously campy nighttime soap that used to air here in Canada. That has nothing to do with Up, it just made me giggle, although come to think of it Charles Muntz would probably have been right at home in the Canadian Paradise Falls.

Along their travels Carl and Russell add a bird named Kevin and a dog named Dug to their posse and the rest of the plot I will leave you to discover for yourself. Written by Bob Peterson, a co-writer on Finding Nemo and a co-director here, the story is well-plotted and keeps things simple enough that it can be followed by kids while also being written cleverly enough to keep adults interested. The animation is, of course, outstanding with the vibrancy of the colour pallet being of particular note. I’m predisposed to dislike 3-D because I find the glasses uncomfortable and the form gimmicky, but it’s generally put to good use with this film and doesn't call attention to itself to the extent that it distracts from the film itself.

While I enjoyed the film overall - particularly anything involving Dug, whose obsession with squirrels reminded me of my parents' dog – I wouldn’t call it flawless. As it approached the end I was far too aware of how it was trying to manipulate me and though all films try to manipulate you in some form or another, subtlety goes a long way and it felt at times like Up was daring me not to go “awwww.” Still, it's a very good film that manages to cater to multiple demographics without pandering and the quality of its production is first-rate all the way.

Great flick. Although I do think it suffered a little in the second half from pandering to the kids, it's still a brilliant film.

I agree. Montage of photos of Carl and Ellie's relationship packs a punch. It's one of my favourite scenes in this film.