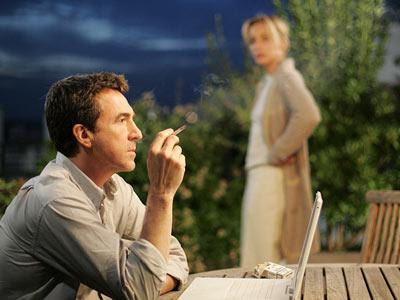 My reaction to most of Tell No One can be summed up in pretty much three words: Wait, what? Oh. This is to say, the plot is convoluted. It twists and turns and comes around then goes back again and even at the end, when everything is explained and wrapped up nicely, you can’t help but wonder if something is still missing, if maybe it wrapped up a little too nicely. It’s an effective mystery/thriller and with all that twisting and turning, it’s astonishing that it never goes off the rails.

The film begins in the French countryside where Alex Beck and his wife Margot (Marie-Josee Croze) are enjoying a romantic getaway. One night they go swimming and have a fight. Margot returns to the house and moments later Alex hears her screaming. He goes after her but is knocked out and spends three days in a coma during which Margot's body is found, the victim of a serial killer. Eight years later, long after the investigation and trial of the supposed killer, questions remain, particularly the question of how Alex, who was knocked out while climbing out of the water and fell back into it, dragged himself up onto the dock while comatose.

Two bodies are found buried nearby the country house and the discovery leads to more evidence, more questions, as far as the police are concerned. Alex, too, has questions. He’s been receiving mysterious emails which lead him to believe that Margot is, in fact, alive and the closer he looks into the details of her death, the more convinced he becomes that it was faked as part of an elaborate plot. For obvious reasons, I don’t want to reveal too much about the plot because discovering it in all its intricate – albeit somewhat “soapy” – glory is part of the reward of watching the film. I will say that in the course of unraveling the mystery, there’s a really great chase sequence that, unlike a lot of movie chase sequences, actually seems to take a toll on the protagonist.

The story, based on a novel by Harlan Coben and adapted by Guillaume Canet, is well constructed. It manages to give the audience nuggets of information here and there – some of it false, some of it true – without tipping the whole thing and making the conclusion obvious. It takes time to lay a solid foundation for the mystery to stand on, tossing out bits of information which at first seem to be of little importance but help to illuminate much of what we discover later. For example, pay close attention to the fight that Alex and Margot have at the beginning of the film because it ties directly to a revelation near the end.

The film suffers, somewhat, from having a villain who comes directly from stock but, truthfully, the villain doesn’t play much of a role in the story. It’s more a Hitchcockian wrong man forced to go on the run story and the focus is very much on the protagonist and his efforts to clear his name and discover the truth. He’s aided in this by his sister, Anne (Marina Hands), her wife, Helene (Kristen Scott Thomas), the lawyer they hire to defend him and, eventually, one of the police officers investigating the situation who thinks that, maybe, Alex looks a little too guilty and that that’s the clearest sign of his innocence. All the players are well-cast and I particularly liked Scott Thomas, whose character is Alex’s confidante in addition to being his sister-in-law. The character could easily have been forgettable, given that she spends most of the film simply acting as a sounding board for Alex’s theories, but Scott Thomas lends her a commanding presence that ensures her importance to the story as a whole.

All told, this is a very engaging and robust film. I don’t know that the final shot, which veers a little far into sentimentality, does the film any favors, although I suppose that it fits with the dreamy quality of the opening moments. I’m still convinced that I’m missing something, though that may be because some of the elements which seem like throwaways actually are (if anyone can tell me what purpose is served by Helene’s comment that Anne thinks she’s having an affair, I’d appreciate it because as far as I can tell that never comes up again and is there simply for the sake of detail).