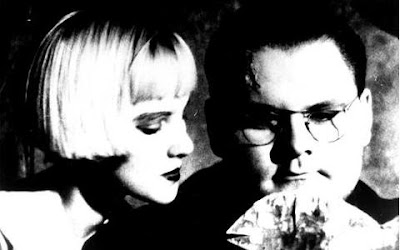 If you’re familiar with the work of Guy Maddin, you know, more or less, what to expect from the look of Tales From The Gimli Hospital. His aesthetic is in line with silent and early sound films, managing not only to bring that era to mind, but also to imbue his films with its spirit. They always feel like unearthed classics, films thought lost but now somehow found – and yet there’s something about them that also feels distinctly modern. Maddin has become one of my favorite filmmakers and, though I haven’t yet been able to see all of his films, I’ve come to a conclusion: if his name is on it, you can’t go wrong.

Tales From The Gimli Hospital is Maddin’s first feature length film, though at 70 minutes it’s not a particularly long feature. Shot entirely in black and white and featuring little dialogue, the film unfolds in a dreamy fashion (or, perhaps, nightmare given the events of the story). It begins in the Gimli Hospital where two children wait at the bedside of their dying mother. Their grandmother begins to tell them a story which makes you, as a viewer, question the wisdom of leaving her in charge of small children.

The story takes place many years earlier during an outbreak of small pox. In it, Einar the Lonely (Kyle McCulloch), a man who lives in a shack and smokes fish for a living, becomes afflicted and is taken the hospital for treatment, where he develops a friendship with Gunnar (Michael Gottli), a fellow patient. From the beginning this part of the film takes a distinctly surrealist turn, seeming to be the long-lost fraternal twin of an early Bunuel film. The nurses are actually men in drag, who sleep in blankets of dirt. One of the patients is a minstrel who shoots a duck inside the hospital. Instead of anesthesia, the doctor has the nurses put on a puppet show to distract the patient from violent surgeries performed with farm tools. You get the picture – or maybe you don’t; I certainly wouldn’t have believed it until having seen it.

Einar and Gunnar become friends, of a sort, and tell each other stories in the hospital. Gunnar’s is the tragic story of his love for Snjofridur (Angela Heck), whose devotion to him he cannot quite comprehend. Snjorfridur nurses him at the beginning of his illness and then marries him in a delightfully absurd ceremony (because the local priest is afraid of catching smallpox, he stands on the other side of a river during the ceremony and Gunner and Sjofridur have to yell their “I do”s to him) and later contracts smallpox herself and dies. Einar then tells of his own recent experience with death, when he happened upon something strange: a woman buried in ceremonial fashion, her body wrapped up with various trinkets and placed on a platform. Einar is drawn to it and begins peeling away the layers of covering, stealing the trinkets and, in a fit of ecstasy, defiling the body. But wait, Gunnar says. He paused but wasn’t actually finished his story...

Maddin is a filmmaker whose stories tend to shoot off in all sorts of bizarre directions but who nevertheless always seems to be in control of his narratives. That being said, in comparison to his more recent films, the balance between form and content in this one is a little off and the actual story doesn't really start to gel until near the end. What you see here are the roots of what you find in later Maddin films and though its a little bit rough around the edges, it's still an interesting viewing experience and a must see for any Maddin fan.

The only Guy Maddin film I have seen is My Winnipeg (2007) and I found it to be pretty interesting. Gimli Hospital sounds like it would be interesting as well, might have to give it a watch sometime. I have been thinking about trying to see more of Maddin's work.

I would highly recommend The Saddest Music In The World. It's my favourite of his films.