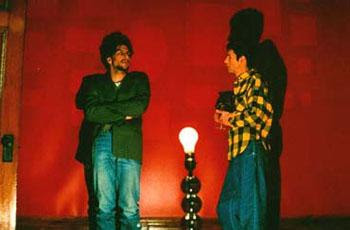 "That's not a suspense story, it's a Greek tragedy!" proclaims Alfred Hitchcock towards the end of Le Confessional. While the character Hitchcock's declaration suggests that the two forms are mutually exclusive, Robert Lepage proves that they're not, managing to create a film that is both a successful suspense/mystery story and a saga of human suffering and torment. Narratively and visually, it's a totally engaging and engrossing film.

The story takes place in Quebec City during two time periods: one half takes place in 1952 when Alfred Hitchcock (Ron Burrage) comes to town to film I Confess and the Lamontagne family struggles to cope with the social stigma of Mrs. Lamontagne’s unwed and pregnant 16-year-old sister, Rachel (Suzanne Clement). The other half takes place some 40 years later, after the death of Mr. Lamontagne brings his son, Pierre (Lothaire Bluteau) back from China. Pierre’s primary concern is in tracking down his adopted brother, Marc (Patrick Goyette), Rachel’s son who was raised by her sister and brother-in-law following her death. Time has not been kind to Marc, a former swimmer now reduced to hustling to make ends meet, spiraling in self-loathing and drug addiction. In an effort to help him, Pierre begins looking into the circumstances of Marc’s birth, hoping to find out once and for all who Marc’s father was, a search which ends less in clarity than in tragedy.

Written and directed by Robert Lepage, the film weaves itself easily between the two time periods and in and out of the film within the film. Portions ofI Confess are filmed inside the church where Rachel worked until the discovery of her pregnancy, and Hitchcock’s plot mirrors Rachel’s story. In Hitchcock’s film, a priest is accused of a crime and unable to reveal the identity of the actual culprit because it was revealed to him inside the confessional. In Le Confessional, a young priest (Normand Daneau) is expelled from the church because everyone assumes that he’s the one who impregnated Rachel, having spent so much time with her when she worked at the church. She confesses to him the actual identity of the father, which of course he can’t reveal. He begs her to clear his name but she can’t because, to her, the truth is much worse than the assumption and leads to her eventual suicide.

Le Confessional, aside from being simply a very good film, is astonishingly good for being a directorial debut. Lepage guides the story with a firm hand, uncoiling the mystery of Marc’s paternity slowly while also giving the characters time and space to develop. He also does some very interesting things visually. There are, quite naturally, a number of shots which echo some of the more famous shots from Hitchcock and manage to be fitting homage rather than cheap theft, but these are only a small part of the technical grace demonstrated within the film. There is a great overhead tracking shot that follows Pierre as he searches for Marc in a bathhouse, making the interior of the building look like a maze. There is a room in the Lamontagne house that Pierre has to keep repainting because the outlines of photos which used to hang there keep bleeding through (the past always coming back to haunt). The symmetry of images and the color red are motifs which show up time and again to good effect. It’s a very thoughtfully crafted film on both the narrative and visual levels.

Lothaire Bluteau is the standout of the cast, an actor who manages to appear simultaneously fragile and strong. This is true not only of his performance here, but also of other performances of his that I’ve seen, particularly in Jesus of Montreal. He’s always very soft-spoken, but he manages to convey a lot with that barely-above-a-whisper voice of his. As the “bad” brother, Patrick Goyette is also very good and makes Marc the inverse of Pierre, a character who looks physically solid, but is mentally and emotionally as fragile as an egg shell. Marc’s fate is inevitable, foreshadowed in the opening scenes, but nevertheless tragic and while he isn’t necessarily a “good” man (as his interactions with his ex-girlfriend and their son demonstrate), you still feel for him.

Upon its release a decade or so ago, Le Confessional was pretty widely celebrated within the Canadian film community, receiving several Genie nominations and walking away with the prize for Art Direction, Director and Picture. It’s a film worth revisiting and has held up pretty well, though some of the music choices date it and, in fact, make it seem older than it is (I’m looking at you Depeche Mode). It should be noted, however, that if your curiosity about the film stems from the inclusion Kristin Scott Thomas in the cast, that her role as Hitchcock’s assistant is actually fairly small and quite disproportionate to her prominence on the DVD cover, which I assume is attributable to the film having been released for home viewing at about the same time that The English Patient was making its theatrical splash.

Good memories from Grade 12! However, the less appreciable moment of these memories was when my cinema teacher asked us to write a three-question paper on which one of the question consisted in saying how this film looks like some Asian films (ex: Wong Kar-Wai).

Anyway, I mostly loved the film because of the cinematography and performance at that time thanks to the way how Lepage show the contrasts between the two leading characters of Pierre and Marc. In fact, while Pierre is skinny he has quite a strength to go for the truth even though it's not pleasant to hear. As for Marc, he may look physically strong, but as you pointed it out, the director manages to show really well his fragility. All in all, from what I remember, maybe what the film also tries to say is that despite our family's past, we should always look forward to the future.

It's probably best to look to the future when the past is as messed up as it is for the family in this movie.