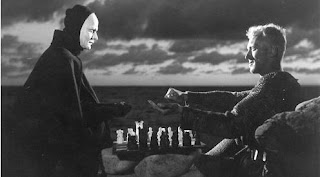 I suppose I can now officially call myself a cinephile without hesitation because I’ve finally seen a film by Ingmar Bergman (two, actually, but more on that tomorrow). I wasn’t entirely clear beforehand about the plot of The Seventh Seal, although I knew that it featured a game of chess between a Crusader and Death and that I should be prepared for plenty of symbolism and meditation on the existence of God. What I wasn’t prepared for was how engaging this film would be, how easy it would be to lose myself in it.

The first scene is stark and bizarre, setting the tone for the rest of the film. Antonius Block (Max von Sydow) and his squire, Jons (Gunnar Bjornstrand), are sleeping on a beach. They have been away from home for a long time, fighting in the Crusades, and now Antonius has begun to question the existence of God. A man shows up on the beach and Antonius recognizes him as Death (Bengt Ekerot). He asks Death to join him in a game of chess, reasoning that as long as they’re playing, he remains alive to seek the answers to his questions about God. Elsewhere a trio of performers is also waking and preparing to continue their journey to the next village where they will perform. One of the performers, Jof (Nils Poppe), has an otherworldly encounter of his own, convinced that he’s seen the Virgin Mary crossing the field in the distance.

The Crusaders and the performers will cross paths in a village where the plague is taking a heavy toll and religious fervour dominates. The first real demonstration of this religious fervour actually interrupts the scene being played out by the performers, who find themselves transformed into members of the audience in mid-performance as the fanatics come moaning and flagellating themselves through the square. Religion figures in the film as performance, as something superficial and devoid of meaning when compared to the genuine anguish felt by Antonius and the serious questions he is asking.

Shortly after this religious demonstration, the performers opt to join the Crusaders as they carry on their way, travelling through the woods towards Antonius’ castle. The group is followed all the way by Death, who assures Antonius that time is running out not just for him but for everyone, including a girl from the village who will be burnt at the stake because the authorities are convinced that she has been in contact with the devil.

From a technical standpoint, the frequency of close-ups and the composition of certain shots reminded me a lot of The Passion of Joan of Ark, which also explores questions of religious fervour. However, the film is in no way derivative. It is distinct and original and totally absorbing. As Antonius and Death, von Sydow and Ekerot are probably the film’s most recognizable figures, but my favourite performance belongs to Bjornstrand. As the squire, Bjornstrand acts as a counterpoint to Antonius: where Antonius represents the high, Jons represents the low; where Antonius has questions, Jons is always ready with answers – though even he admits that he doesn’t necessarily believe what he says as much as he just loves having something to say, which is a good thing since he has some of the film’s most memorable lines. I think the performance by Bjornstrand is one of the reasons the film is so accessible even though it’s so heavy with symbolism and existential questions.