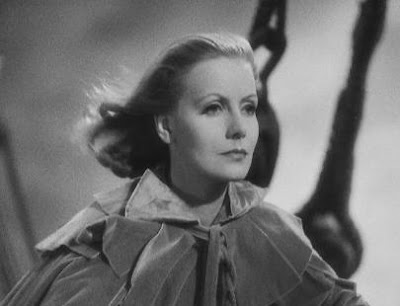 Year: 1933
Director: Rouben Mamoulian
Great Because...: From a purely aesthetic point of view, the film ends in a way that few other films can top: on a lingering close up of Greta Garbo's face. Nicknamed The Swedish Sphinx, Garbo's expression here is truly mysterious, telling us everything and nothing all at once.

After a lifetime spent subverting tradition, Queen Christina finally does what's expected of her: she finds the man she wants to marry. The only problem is that it's the wrong man as far as everyone from the royal court down to the populace is concerned. When forced to chose between love and power, Christina choses the former, abdicating her throne and exiling herself from her country in order to set off with her lover, Antonio.

However, before Christina and Antonio can sail into the sunset together on his ship, he has some unfinished business with Magnus, one of Christina's former suitors. Antonio finds himself on the losing end of the duel but lives long enough to bid Christina farewell. Having lost everything, Christina sets sail as planned, not knowing what lies in store for her beyond the horizon. As Christina takes her place at the bow of the ship, the camera moves in for an extreme closeup, letting Garbo's perfect face be the final word.

I agree that it is a great scene, but when asked, didn't Garbo say that she was thinking about nothing during the shot? Somehow, the blank(?) expression allows the viewer to impose any interpretation about what's going on inside her mind. The scene is a kind of object-lesson in the way Garbo created complexity and nuance out of doing very, very little in front of the camera.

Garbo was definitely a minimalist, an actor able to convey a lot with just small gestures.