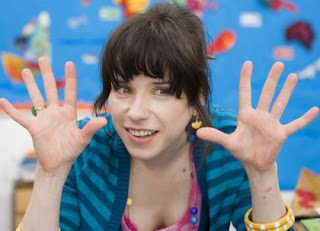 I see a lot of movies. I’m fortunate that a lot of those movies that I see are also quite good, though it’s still rare for me to see a movie that genuinely makes me feel better about the world around me. As I walked out of Happy-Go-Lucky, I felt really, really happy. It’s as simple as that. This movie enchanted me from its first minute and held me rapt right through to its last.

Happy-Go-Lucky comes from writer/director Mike Leigh and, like most of his films, it unfolds at a natural, life-like pace rather than at a pace driven by plot development. Its focus is more on character than plot, which can make it a little hard to describe but I’ll do my best. Poppy (Sally Hawkins in an absolutely delightful performance) is a perpetual optimist who would like nothing more than to see other people as happy as she herself is. Her upbeat attitude and her willingness to really listen to people make her perfect for her job as a grade school teacher and for her role as unofficial mediator between her two sisters.

At the other end of the spectrum the film gives us Scott (Eddie Marsan), Poppy’s driving instructor. Scott is a dark, angry man, full of prejudices ranging from racism to homophobia to general hatred of every other driver on the road. He and Poppy get off to a rough start immediately when he criticizes her choice of shoes (“I don’t look good in flats,” she explains. “I don’t care how you look,” he replies, already at the limit of his patience) and continue to clash over their very different outlooks on life. At first Poppy simply tries to get Scott to lighten up and then she tries to get him to open up and reveal the roots of his anger. These scenes manage to alternate easily between being funny (I don’t think I’ll ever be able to get into a car again without thinking, “En-ra-ha!”), scary and sad. It’s Poppy’s ability to navigate this complex and often volatile relationship that reveals the deeper shades of her character.

The success of this movie depends on the performance by Hawkins. In lesser hands, this character would have been totally insufferable, but Hawkins makes it work. I think the key is that Poppy’s sunny disposition is never made to seem like self-protective delusion or constructed facade; Poppy just is one of those “high on life” kind of people who can’t help but find something to smile about. It’s a winning performance and it’s surrounded on all sides by other great performances. From Marsan as the tightly-wound and obviously wounded driving instructor to Alexis Zegerman as Poppy’s best friend and roommate, the film is populated with very skilled and naturalistic acting.

Mike Leigh’s trademark is that his work comes largely from improvisation, but that isn’t to say that the final product ever lacks control or guidance. The film doesn’t simply meander from adventure to adventure; it has a nice, natural flow as it follows Poppy through various aspects of her life from her job to her driving lessons, from outings with friends and a trip to visit one of her sisters, and a couple of segments which take place in a flamenco class taught by a hilariously passionate instructor. With Leigh steering the story it manages a nice balance of elements and the end result is a film that is charming and compelling.