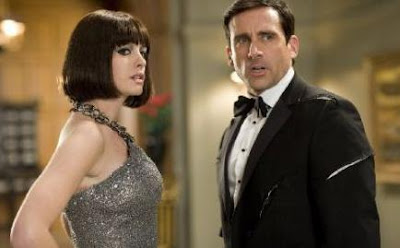 The TV version of Get Smart was before my time, but it’s one of my dad’s favourite shows so I’m familiar enough with the premise without being attached to the “purity” of the original. Although I enjoyed the film version, I think it falls prey to the same problem found in a lot of TV to movie adaptations, which is that it can’t seem to make up its mind about how to engage the source material. This inherent unevenness is a drag on the film, giving it an uneasy mix of action and comedy.

At the beginning of the film Maxwell Smart (Steve Carell) is an analyst whose reports run hundreds of pages, detailing seemingly mundane facts that the field agents mock but that the Chief (Alan Arkin) appreciates because it reminds him of old school spy work. Smart wants desperately to be promoted to field agent, but the Chief thinks he’s too valuable as an analyst until a break in at CONTROL headquarters means that the identities of all the field agents have been compromised. In order to stop the latest plot by KAOS, the Chief has no other option but to promote Max to Agent 86 and send him out with Agent 99 (Anne Hathaway), whose recent plastic surgery means that she’s still viable in the field.

Max and 99 are sent to the Ukraine where agents from KAOS, led by Siegfried (Terrence Stamp), are assembling nuclear weapons that they intend to sell to dictatorships which are hostile towards the US. The plot is set-up well enough, but it’s really the film’s secondary concern. First and foremost the film is about letting Max find new and interesting ways to injure himself, from a mishap with a mini-crossbow to his attempt to slip through a room secured with laser beams. Carell takes these moments in stride, as able at physical as verbal comedy.

When the film is focused on the comedic aspect of the story it’s quite good, but in when it tries to be an action movie it looses its way a little bit. Maybe I’m just difficult to please, but I found myself a little bored by the explosions, high speed chases, and cartoony violence peppered throughout the story. It’s not that it isn’t all well done, it’s just that it’s nothing that I haven’t seen before and I found myself thinking, “Get back to the funny stuff.” Another problem is the romantic storyline between Max and 99. While I know that their relationship is canon as far as the TV series is concerned and formula as far as film construction is concerned, I just didn’t feel any sexual tension between the two which made me believe that they could make the transition from friendly antagonism to love. I think that Carell and Hathaway have good “buddy” chemistry, they just don’t have romantic/sexual chemistry.

Get Smart isn’t an entirely successful movie, but I ultimately feel compelled to give it a pass. I laughed a lot and I think Carell is well cast even if the material sometimes lets him down. If there’s a sequel (and I’m assuming that there will be given the $100 million plus gross), I hope the filmmakers learn from the mistakes of this one and are able to work out some of the kinks.

Get Smart is an interesting movie to rate because the goal of the filmmakers was to make you laugh and you are laughing.....at the same time, it's not a structurally sound, well-cast or sensical movie.

So it's hard to know what to do with it. you handled it well, i think