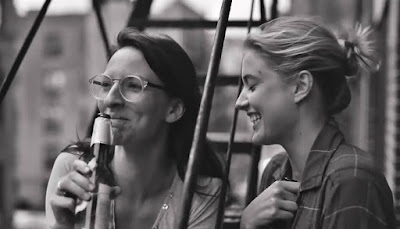 Frances Ha might well be subtitled “A Woman in Transition.” It’s a story all about a period in the life of its protagonist when everything is up in the air: her professional artistic ambitions have stalled and she’s facing the possibility of having to give up her dream in order to support herself; her living situation is in a constant state of flux and she shuffles from one home to the next; and her most important relationship – the one she has with her best friend – appears to be failing, though she doesn’t understand why. At 86 minutes, it might sound like a slight piece of work, but it’s slight in running time only. A finely attuned character piece, Frances Ha is so brilliant and charming that it even manages to use to its advantage all the “New York hipster” trappings that, in a lesser movie, would be too annoying to overcome.

At its core, Frances Ha is a love story, albeit one about a friendship rather than a romantic relationship. Those friends are Frances (Greta Gerwig) and Sophie (Mickey Sumner), friends since college who now live together and whom Frances frequently describes as being the same person “but with different hair.” They are totally sympatico and Frances cannot fathom a future where they aren’t joined at the hip until Sophie suddenly drops a bomb: with their lease coming up for renewal, she wants to move out, having gotten the opportunity to move in with a mutual friend who lives in her “dream neighborhood.” Sophie moves out and Frances begins a nomadic period that sees her living for brief periods of time in various places and with various people and spending less and less time with Sophie. Before she knows it, Frances and Sophie have grown so far apart that she has to hear second hand of Sophie’s intention to move to Japan with her boyfriend, and she finds herself mourning the end of the relationship that she had thought would be the cornerstone of her life.

One of the things that makes Frances Ha such a beauty of a film is that it can build itself on so many things that are very specific to its milieu – Frances and many in her circle of friends are text book examples of people who have fashioned themselves in that performative mode, off-beat but in the trendiest possible way, that has become synonymous with a certain kind of character in certain kinds of movies and TV shows set in New York (at one point in the film, Sophie comes to visit Frances at a new apartment and remarks that the décor is “very aware of itself,” which is spot on but also a perfect way of describing several of the characters in the film, including Sophie herself) – but connect because it epitomizes so many things that are relatable in a general way. Frances’ situation is recognizable to pretty much anyone who has had to make that transition from the extended adolescence of college into bona fide adulthood, where your path begins to diverge from those with whom you once shared so much in common, and where you have to start making hard decisions about where you’re going to go in life. Drifting is no longer an option; things need to start taking on definition.

For much of the film, things in Frances’ life just plain suck. She has to come to terms with the fact that her dream of being a professional dancer may not come true and that she might have to take a job doing office work to make ends meet. Sophie has not only moved out, but no longer seems to have any space in her life for her at all. She makes some pretty bad choices – such as a spur of the moment decision to take a weekend trip to Paris, which she cannot afford and which ends in loneliness and disappointment – and everyone seems to have more money, and greater happiness, than her. Nothing is working out, though Gerwig’s effervescent performance ensures that even when things are at their worst for her, Frances is never a sad-sack; it’s a performance that is always a joy to watch, even when Frances can find little joy in her experiences.

Written by Noah Baumbach (who also directs) and Gerwig, one of the most refreshing things about Frances Ha is how well-conceived its female protagonist is and how it does not feel the need to define her by her romantic life. Frances has a boyfriend as the film begins, but he appears in just one scene during which they break up, and though there are other characters who might, in a different film, be genuine romantic interests for Frances – two of her temporary roommates, Lev (Adam Driver), and Benji (Michael Zegen) – the story is really about everything except her love life and she never spends a moment lamenting her lack of a boyfriend. Given how few films are about women to begin with and how many of those center themselves on the ups and down of their heroine’s love life, this film feels downright revolutionary in this respect. Instead of romance, this is a story about Frances’ friendships, her family relationships, her working relationships, and her struggles to get her life and career off the ground; it’s about her trying to find fulfillment with who she is rather than who she is with. It’s a delightful film and it’s a great one.
Posted by Norma Desmond at 8:00 AM