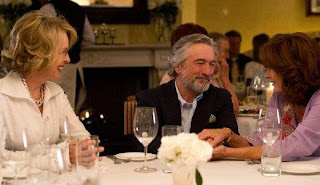 Don’t RSVP. That joke probably seems easy, but I assure you that it’s funnier than about half the supposed laugh lines in The Big Wedding, a largely hollow enterprise with gender, sexual, and racial politics that would have seemed quaintly out of date when Stanley Kramer was still at his well-meaning best, and seem utterly alien today. I’m guessing that the cast is the only reason this thing wasn’t relegated to straight-to-DVD purgatory, but agreeing to appear in this clunker doesn’t exactly bode well for the state of any of their careers.

The Big Wedding centres on the Griffin family: divorced parents Don (Robert De Niro) and Ellie (Diane Keaton), their two biological children Lyla (Katherine Heigl) and Jared (Topher Grace), their adopted son Alejandro (Ben Barnes), and Don’s long-time girlfriend, Bebe (Susan Sarandon). The family has come together for Alejandro’s wedding to his childhood sweetheart, Missy (Amanda Seyfried), an event already fraught with tension as a result of the disapproval of Missy’s parents, who would prefer that Missy marry someone... not latino so that their grandchildren won’t be “beige” (never mind that Barnes himself is not latino and is looks about equally as “ethnic” as Seyfried). Things become even more complicated when, at the last minute, Alejandro decides that his staunchly Catholic birth mother, Madonna (Patricia Rae) who is coming to the wedding along with his biological sister, Nuria (Ana Ayora), can’t possibly know that his adopted parents have gotten divorced and so asks Don and Ellie to pretend that they’re still married for the duration of the wedding weekend.

In addition to Alejandro’s manufactured crisis, Lyla has returned to the family home having split up with her husband and nursing some serious fertility and motherhood related anxieties, Jared has decided that it is maybe, possibly time for him to lose his virginity – the “maybe” in that equation gets eliminated as soon as he lays eyes on Nuria – and there are a number of unresolved issues between Don, Ellie and Bebe resulting from the fact that Ellie and Bebe were best friends until Don and Bebe had an affair which brought about the end of Ellie and Don’s marriage. These issues are of course exacerbated by the “not divorced” farce, with Bebe forced to move into the local hotel, and Don and Ellie being forced to share a bedroom, lest Madonna start to suspect the truth.

Now, let’s walk this back a little bit. It’s 2013. Catholics, even staunch ones, are aware that sometimes people get divorced. Sometimes even Catholics get divorced [editorial note from God: not really], so the pretense seems, at best, unnecessary. Furthermore, despite the fact that Alejandro remained in contact with Madonna throughout his childhood, including regular visits with her, the wedding is apparently the first time that Madonna has ever met Don and Ellie so, really, how invested could she actually be in the continuing soundness of their marriage? And, finally, since Alejandro himself doesn’t believe in organized religion, then doesn’t Madonna have greater concerns than whether or not his adoptive parents have remained married?

The Big Wedding is built on an astonishingly unsound foundation, premised on ideas and characterizations that are entirely lacking in credibility for a film set in 2013. Comedy functions within the realm of exaggeration, yes, but you have to exaggerate something which actually has some basis in recognizable reality. To make matters worse, the directorial rhythms are almost completely out of synch with the would-be comedic beats of the screenplay, which in turn sucks the energy out of many scenes. Despite the proven talents of the cast, there’s not much to recommend this one – unless you like seeing Robert De Niro get punched in the face and thrown up on.
Posted by Norma Desmond at 8:00 AM