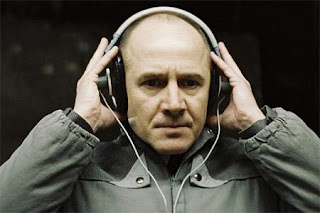 In a totalitarian society which, by its very nature, encourages corruption through its emphasis on placing the good of the system over the good of individual human beings, decency is something which is quickly stamped out or broken, replaced by an everyone-for-themselves outlook. In Florian Henckel von Donnersmarck’s The Lives of Others, however, decency is borne in the very heart of corruption – East Berlin’s Stasi. This is a film about a good man who realizes that he is a cog in a bad machine, and who sets out to make at least one thing right. Whether he succeeds or not is beside the point; what matters is that just by trying, he saves his soul.

Set, appropriately enough, in 1984, The Lives of Others is about Wiesler (Ulrich Muhe), a Stasi agent with a seemingly robotic loyalty to the State, who teaches new Stasi recruits the techniques of interrogation. Though he lives his own life only for the State, he doesn’t easily believe in the complete commitment of others to the ideals of the regime, particularly that of celebrated playwrite Georg Dreyman (Sebastian Koch) who, despite being known as one of the least provocative of East Germany’s artists, seems too good to be true to Wiesler’s trained eye. Given the opportunity, he accepts an assignment to head up a surveillance operation on Dreyman in the hope of catching him in subversive acts, proceeding with cool efficiency to bug Dreyman’s apartment, intimidate Georg’s neighbor into keeping quiet, and set up a centre of operations in the attic of the building. All of this is completely natural to him and he would never, for a moment, stop to question whether what he’s doing is right.

It’s when Wiesler realizes that the operation is not pure, that it has not been inspired by the necessity of protecting the State – and, by extension, its people – but out of self-interest, that his attitude begins to change. Knowing that the mission has its roots in the desire of the Minister of Culture to eliminate Dreyman as a romantic rival for the actress Christa-Maria Sieland (Martina Gedeck), and in the hope of Wiesler’s direct superior, Grubitz (Ulrich Tukur), of gaining advancement through the ranks, Wiesler begins to see that the whole system is built on and sustained by abuses of power. Once that notion is in Wiesler’s head, it begins to inform all of his decisions and, unable to stand by and watch people be systematically victimized by the government, he has to act. What he does will save one life, end another, and ruin his own career.

The Lives of Others works because its careful construction and exploration of its characters gives layers of poignancy to the plot. Wiesler begins the film as a villain, detached from emotion and empathy, thinking only of his “duty” to a system of oppression, and gradually becomes a hero, his humanity awakened by the intimate (albeit one-sided) bond he develops with Dreyman and Christa. The film’s title refers not just to Wiesler’s job, but to what he comes to care about and see value in. Although the narrative explores dark themes, it’s ultimately a hopeful movie and never more so than in its final words, when Wiesler realizes that his sacrifice mattered. There is goodness in the world, even in its darkest corners.
Posted by Norma Desmond at 8:00 AM