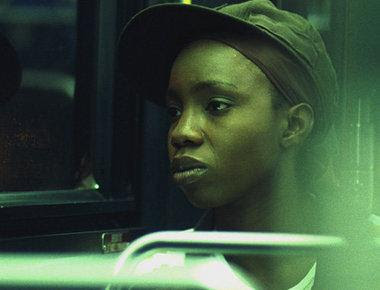 Movies like Pariah are often little seen, stuck in extremely limited release, destined to be a festival darling rather than a mainstream hit. It's the kind of film that's destined to be pigeonholed, in this case either as a "black movie" or a "gay movie," and written off as having niche appeal. It's bizarre considering a film like Pariah probably contains more thematic universality than the current box office top 5 put together, not to mention more resonance.

Pariah centres on Alike (Adepero Oduye), a 17 year old Brooklyn teenager struggling with her identity. She knows - and, to varying degrees, everyone around her knows - that she's a lesbian, though her identity beyond that fact hasn't completely come into focus yet. Like her, her best friend Laura (Pernell Walker) is also gay, though unlike Alike she isn't closeted. At home Alike tries to downplay her sexuality, and her outward expression of it, as much as possible, though her younger sister, Sharonda (Sahra Mellesse), is keenly aware of it and her parents, Audrey (Kim Wayans) and Arthur (Charles Parnell), are aware of it as well, though they seem to believe that simply not acknowledging it will make it go away. Concerned about Alike's friendship with Laura, Audrey does what she can to undercut it, and micromanages her free time by keeping close tabs on her and insisting that she spend her time with Bina (Aasha Davis), the daughter of one of her co-workers.

Alike resents and resits this forced friendship at first, but after finding herself bonding with Bina over their shared musical tastes, begins to enjoy her company. Relieved at having taken control of Alike's social life, Audrey turns her focus instead to the problems in her marriage, unaware that the nascent friendship between Alike and Bina has started to blossom into romance. However, while it seems, briefly, as if Bina will become a source of happiness for Alike, the relationship only brings more complication and heartbreak and at just the point when the other relationships in her life appear to be at their breaking points. Forced to make some major decisions in a short span of time, she assures her father that she isn't running away, but making a choice - a choice to be herself, a choice to live her own life on her own terms.

One of the major themes of Pariah is obviously sex and sexuality, but to call it a "gay film" almost feels reductive, because there's so much more to it. Its primary concern is with how Alike begins to develop a unique identity, one independent of the strong influences all around her. At one point her mother buys some clothes for her, insisting that Alike wear them despite her obvious discomfort and her insistence that the clothes "aren't [her]." Alike will experience several variations on this moment throughout the film, as her personal style from moment to moment seems to be dependent on the company. She dresses like Laura when they go out, hastily changing before she gets home so that her parents won't see, and when she begins hanging out with Bina, she also starts wearing scarves similar to the ones favoured by Bina - an element of her ensemble that she immediately disposes of when things go sour. While the primary focal point of the story is Alike's sexual identity, the primary theme of the film is identity generally and how developing your own voice can be a painful, sometimes brutal process. There's an unblinking honesty to the way the film treats adolescence (and relationships, generally) that should be commended. Nothing is simple in this film and even the moments of villany are contextualized enough to take on a stark complexity.

Written and directed by Dee Rees, making her feature length film debut, Pariah is a film that announces the arrival of both Rees as a powerful filmmaker and Oduye as an actor. All of the actors in the film are excellent, but it's Oduye and Wayans, as Alike's ferociously unaccepting mother, who carry the weight of the narrative and they do it in a way that looks deceptively easy and natural. There isn't a single false note in this film and no weak spots as far as I can see. It is, quite simply, a great movie with a power that transcends any attempts to limit it as being a special interest film.
Posted by Norma Desmond at 8:00 AM

Personal identity is something that all of us struggle with at some point in our lives. I think the fact that the film is based on sexuality, as well just opens the door more to the issues young folks are dealing with today. My friend who is also a colleague, who loves coming of age films, as much as I do, works the late shift with me at Dish. We get together one late night a week to enjoy our love of film together. I make sure to subscribe to a service that lets me get unique films, which is Blockbuster @Home. Together we unwind, relax with a glass of wine, and then have the most enjoyable discussion after each film. Pariah sounds fantastic, and will be on our list of films to enjoy together.