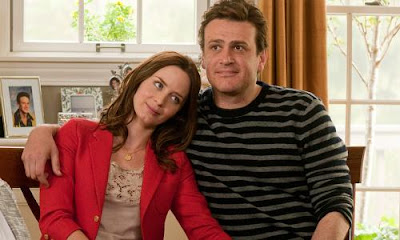 It's always disappointing when a film that has all the individual elements of a hit just can't find a way to make them work together in harmony. The Five-Year Engagement boasts two talented actors as its leads, several other talented actors in supporting roles, and a screenplay that has real flashes of intelligence and takes its characters seriously as people while still being able to poke fun at them. So what went wrong? Ultimately a nearly perfect first half gives way to a second half that drags under the weight of its plot contrivances and brings the whole thing down.

Jason Segel and Emily Blunt star as Tom and Violet, a happy and newly engaged couple based in San Francisco. Tom is a successful chef on the verge of something great, and Violet is a psychology student who hopes to do her post-doctorate work at Berkeley. Although both feel ready for marriage, the wedding ends up being put off first so that it won't compete with the sudden marriage of Violet's sister, Suzie (Alison Brie) and Tom's friend, Alex (Chris Pratt), who tie the knot several months after a drunken hook up at Tom and Violet's engagement party results in pregnancy. The wedding is put off again after Violet is accepted to the University of Michigan for a two year program. Though Violet worries that Tom will resent her for disrupting his career, he insists that he's more than happy to put his own dreams, as well as the wedding, on hold for two years so that Violet can get her career started. Once in Michigan, Tom is disappointed that the only work he can find is in a sandwich shop, but fortifies himself with the knowledge that in two years they'll be back in San Francisco and his career will be back on track.

Things don't go according to plan, as Violet thrives in Michigan and her program time gets extended, and Tom feels increasingly adrift. As Tom's sense of self and sense of purpose continue to diminish, his relationship with Violet begins to deteriorate. After a desperate attempt to throw together a wedding in Michigan, the two decide to go their separate ways and Tom returns to San Francisco, where he begins a relationship with Audrey (Dakota Johnson), the young hostess at the restaurant where he works, while Violet takes up with her mentor, Winston (Rhys Ifans). There remains, however, a sense of unfinished business between them and their respective friends and family members encourage them to work things out. Will they manage? Is this a romantic comedy?

Segal and Blunt both turn in great work as Tom and Violet, guiding the characters through their changing relationship while always maintaining a solid sense of who each of them is as a person. The primary issue in their relationship is believable, namely that they have difficulty balancing their respective individual dreams, and for a while the film follows this plot in a way that feels honest and mature. The problem is that the film doesn't really know where to go after it establishes the conflict and falls back on cliched subplots involving romantic misunderstandings and third parties. What makes this turn of events so disappointing is that the film starts out so promisingly and with such a strong start, it shouldn't need the trite and predictable elements used to pad out its finale. Plus, for all the time the film spends establishing the issues that will ultimately separate Tom and Violet, it really doesn't put much effort into actually resolving them.

The weaknesses in the screenplay might have been easier to overlook had the film unfolded at a quicker pace, but the fact that it absolutely drags during its second half makes its problematic elements all the more obvious. The Five-Year Engagement is not without strengths - as I said, Segal and Blunt are both great, and Brie absolutely steals the movie every time she appears on screen - but it ultimately falls far short of what it could have been.
Posted by Norma Desmond at 8:00 AM

wow. i so want emily blunt in a good project again.

I highly recommend Salmon Fishing in the Yemen. She's great in it and it's a pretty good movie.