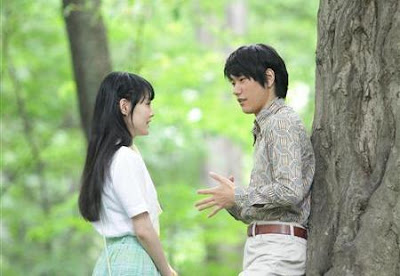 Book to film adaptations always present the possibility of certain problems. The most common complaint is that the film doesn't live up to the book - which is often, though by no means always, true - a complaint that might hold true even if you've never actually read the book to begin with. I've never read Haruki Murakami's much-loved novel Norwegian Wood, but I still feel confident in stating that it trumps the movie. Not that the movie is bad - it's actually pretty good - just that I can't quite shake the feeling that there's something missing from it, something which the novel contains and which makes the story seem more complete and engaging.

The story is set in Tokyo in the 1960s and centres on Watanabe (Kenichi Matsuyama), a University student whose life seems to be defined by tragedy. Watanabe remains haunted by the suicide of his best friend, Kizuki (Kengo Kora), and when he runs into Naoko (Rinko Kikuchi), once his friend and Kizuki's girlfriend, they grow close, drawn together by their shared loss. The two fall in love, but Naoko falls into a deep depression and eventually she leaves the University in order to enter a sanitarium near Kyoto. Watanabe visits her and tries to maintain the connection he feels with her, but she's increasingly withdrawn from him and from the world - something crucial has been lost for her, and she's unable to regain her footing within society.

Though he continues to feel love for Naoko, Watanabe begins a tentative relationship with Midori (Kiko Mizuhara), who in personality is the exact opposite of Naoko. This relationship proceeds slowly, beginning as friendship and steadily progressing to the point where Watanabe finds that he has to make a choice between her and Naoko. For much of the story he lives with one foot in the life he might have had with Naoko, if she wasn't already so far gone, and the other foot in the life he might still have with Midori, if only he can learn not to take her for granted.

The bare bones of the story could be the basis for any number of formulaic romance films, but Norwegian Wood does go considerably deeper. The love triangle helps give shape to the narrative - particularly in the way that Watanabe goes back and forth from Naoko to Midori (or "past" and "future") - but it's the theme of mortality that really defines the story. The spectre of death hangs over the film and scenes are tinged with a profound and inescapable sense of loss. There is a deliberate feeling of emptiness that underscores many scenes, a loss that the characters can't quite articulate but feel acutely.

A lot of things work in Norwegian Wood - the actors are uniformly excellent, the cinematography is gorgeous, and the story itself is often moving - but I can't quite escape the feeling that something is missing and that I would have gotten more out of it if I'd read the novel and had that as a base for filling in some of the film's blanks. I also think that the film doesn't quite hit all of the thematic notes that it wants to (the love triangle occurs against the backdrop of civil unrest and Watanabe is seen a few times literally walking through protests, but the film doesn't really do very much with that). It's a good film, but one that falls far short of greatness.
Posted by Norma Desmond at 8:00 AM