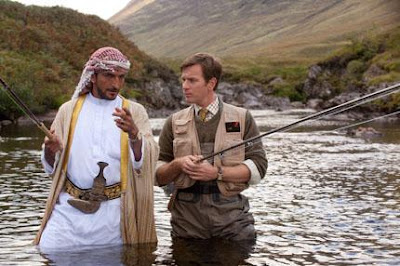 A film with a title like Salmon Fishing in the Yemen might sound like a story with limited appeal, but it's actually a delightful surprise, a film with plenty of heart and no shortage of charm. A political/romantic comedy that finds just the right balance between comedy and drama, and between political satire and realistically drawn characters, this is a definite hit in the somewhat hit-and-miss career of director Lasse Hallstrom.

Salmon Fishing in the Yemen begins with an outrageous premise: a wealthy Yemeni sheikh (Amr Waked) with an abiding love of fishing opts to use his considerable resources to bring salmon fishing to his home country. He's aided in this endeavour by his financial consultant, Harriet Chetwode-Talbot (Emily Blunt), who is able to rope a government-employed scientist, Dr. Alfred Jones (Ewan McGregor) into the plan after the Prime Minister's office gets wind of it and decides that it's the perfect opportunity to engineer a positive story about British-Middle East relations. Fred is a less than enthusiastic participant in the plan, attempting to thwart it first with sarcasm and then with impracticable demands such as meeting the engineers behind China's Three Gorges Dam. His point, which he makes over and over, is that the plan is insane and could never possibly work.

Fred begins to soften towards the idea after meeting Sheik Muhammad, with whom he obviously bonds over fishing, and as he gets to know Harriet better. Fred is lonely in his marriage as his wife is constantly going to work abroad and, even when she is home, doesn't really seem to take much notice of him. Harriet, meanwhile, is separated from her boyfriend, who has been deployed to Afghanistan and shortly thereafter goes missing in action. As the two help each other through their respective personal difficulties, and watch as Muhammad's dream begins to come to fruition, they fall in love, but fate conspires to make their relationship seem as impossible as the notion of making salmon fishing in the desert a feasible and sustainable option.

Written by Simon Beaufoy (whose most recent work includes 127 Hours, Slumdog Millionaire and the little seen by very good Miss Pettigrew Lives for a Day), who adapts the story from the novel of the same name by Paul Torday, Salmon Fishing in the Yemen is a light weight political comedy but a fully realized human story. The two main characters - Fred and Harriet - are very well-drawn and the relationship that develops between them is one that has emotional heft while also having a remarkable lightness of touch. The screenplay never feels like its pushing them, or the other characters, in unnatural directions for the sake of the plot and McGregor and Blunt have a nice, easy chemistry together that makes them believable as antagonists, friends and romantic interests. Both actors are excellent, as is Waked, though his character does sometimes stray a little far into the "mystical minority" stereotype, but Kristin Scott Thomas walks away with each and every scene she's in as the Prime Minister's Press Secretary who is determined to get good press out of the situation come hell or high water.

Although highly enjoyable from beginning to end, the film does have a few minor problems. One is that the stakes are never really very high, even when the film is telling us that they're very high indeed. The obstacles standing in the way of Fred and Harriet's relationship are barely obstacles - Fred's marriage is all but over as the film begins and Harriet's relationship is only three weeks old by the time her boyfriend deploys - and the unrest in Yemen that the project inspires barely registers despite an assassination attempt on Muhammad and an attempt to sabatoge the project by destroying a dam. If these threads had been made a little more robust the film likely would have been better and more meaningful for it, but as things stand Salmon Fishing in the Yemen is still a good film. Very funny and incredibly well-acted, it's definitely worth seeking out, especially right now when there's such a dearth of decent cinematic options.
Posted by Norma Desmond at 8:00 AM

Love this movie, enjoy your site and reviews, keep it up...