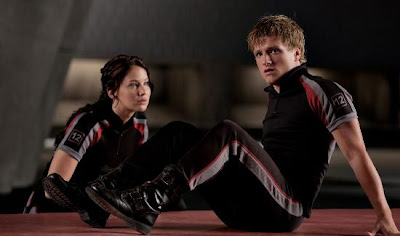 It may be a story about teenagers, featuring an imperilled female protagonist and a love triangle, but The Hunger Games is about as far from Twilight as it gets. A slick dystopian action film complete with terrific performances and great production values all around, The Hunger Games is an instant classic of its genre.

The Hunger Games takes place in a distant, post-apocalyptic future in the nation of Panem, which consists of a wealthy capitol surrounded by twelve poorer districts. 74 years earlier the residents of the districts rebelled against the rule of the Capitol, a rebellion which was eventually crushed and out of which were created the annual Hunger Games. As a result, every year each district must offer up one boy and one girl between the ages of 12 and 18 to fight to the death for the entertainment of the Capitol's residents. When young Primrose Everdeen (Willow Shields) is selected to represent District 12, her older sister Katniss (Jennifer Lawrence) volunteers to take her place. The boy who will join her in representing the district is Peeta Mellark (Josh Hutcherson).

Katniss and Peeta are taken to the Capitol, where they are trained in combat but also in playing to the audience. Their mentor, Haymitch (Woody Harrelson), a former Hunger Games winner, counsels them on how to make the audience like them, explaining that the more likeable they are, the more compelling their story, the more likely sponsors are to send gifts of food, medicine, or tools. In a pre-Games interview with TV host Caesar Flickerman (Stanley Tucci) Peeta sets up his and Katniss' story as one of star-crossed love, which angers Katniss at first but which she later learns to turn to her advantage. As the residents of Panem watch, Katniss, Peeta, and 22 other Tributes of varying levels of survival skill battle it out until only one remains.

A story like The Hunger Games requires a greater suspension of disbelief than a straight drama, but one thing all genres have in common is that you need to have some level of emotional engagement and investment in the characters in order for it to work. For the most part The Hunger Games succeeds in this regard - "for the most part" because, while it creates an emotional touchstone in Katniss, few of the other characters are fully formed and fleshed out beyond archetypes. But, still, it is able to create an emotionally engaging hero in Katniss and an incredible amount of tension with respect to her survival even though on an intellectual level you know she'll survive because, a) she's the protagonist, and b) it's a trilogy.

Because it's the first entry of a trilogy, The Hunger Games ultimately has two jobs to do. First, it has to tell one complete story that will allow it to stand alone as a film. Second, it has to set up the arcs that will play out over the rest of the series. It manages to accomplish both jobs, feeling like a full story in its own right while also feeling like the beginning of a saga that will be continued. For example, although Gale (Liam Hemsworth), Katniss' friend and the third side of the love triangle with Katniss and Peeta, doesn't factor into much of this particular part of the story, the film efficiently and effectively establishes him as a character and his relationship with Katniss; and there is the sense that Katniss' actions, which turn the Games upside down, will have lasting and irrevocable consequences that have yet to be fully realized as the film draws to a close.

Jennifer Lawrence, so fantastic in 2010's Winter's Bone, brings a similar strength to Katniss. She's a survivor in every sense of the word, one who overcomes the obstacles in her path but never sacrifices her humanity in the process. She's the kind of character that you can build a series around and Lawrence's performance is the kind that can draw your eye away from the film's minor flaws.
Posted by Norma Desmond at 8:00 AM

I'm quite interested in The Hunger Games. By the way, I can tell you're quite an expert when it comes to films. And seems to me like we have a few directors in common. I've just reviewed The Iron Lady on my blog: www.artbyarion.blogspot.com

So feel free to check it out.

The film doesn't really get going until they actually do get to The Hunger Games, but when it does get started up its entertaining, tense, unpredictable, and very well executed from Gary Ross. I also couldn't believe that this was his 3rd film after other flicks such as Seabiscuit and Pleasantville, which are both good but are different from this one. Still though, great jobs from everybody involved and I cannot wait for the sequel. Good review Norma.