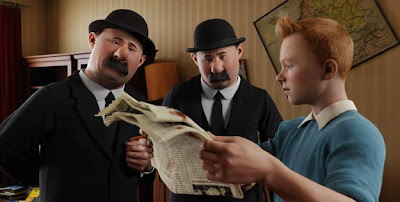 Although I didn't really take much notice when The Adventures of Tintin was released theatrically (that will happen when a film is released directly in the middle of Oscar season madness), it would appear that it was a somewhat polarizing. Loved by many critics and recognized by many awarding bodies, the film was all but shut out by the Academy, gaining a Best Score nomination but not even showing up in the Animated Feature category. It was a huge success overseas but had a somewhat lacklustre domestic box office ("lacklustre" given the director, the fact that it was 3D, and it's family friendliness) and just generally seems to have been met with a bit of an "eh." It's a bit of a shame because, while I don't think the film is by any means a masterpiece, it's a fun and very ambitious movie.

Based on the comic book series of the same name, The Adventures of Tintin finds adventurous young journalist Tintin (Jamie Bell) dropped immediately into a mystery involving a model sailing ship called the "Unicorn." He purchases the ship at an outdoor market, beating Ivan Ivanovitch Sakharine (Daniel Craig) to the punch, which in turn results in Tintin's apartment being ransacked and the model stolen. Fortunately for Tintin, before it was stolen the mast had been broken, revealing a scroll that was hidden inside, a scroll which the thieves don't see. Unfortunately for Tintin, he puts the scroll in his wallet, which gets stolen by a pickpocket.

Losing the model and the scroll starts a series of events which finds Tintin abducted and imprisoned on a ship, escaping on a lifeboat with the ship's drunken captain Haddock (Andy Serkis), hijacking a seaplane and then crashing it into the desert, finding another model ship with another scroll, and engaging in several chases in several different locales in search of treasure. The treasure is the lost cargo of the real "Unicorn," captained by Haddock's ancestor, and three scrolls will reveal its whereabouts - assuming that Tintin and Haddock can live long enough to get to it.

The Adventures of Tintin is a fast-paced story that rushes from action piece to action piece. The action scenes are incredibly well-constructed, particularly the long (and eventful) chase scene through the streets of the port city where Tintin and Haddock find the third model. The animation looks great - although this appears to be one of the most polarizing elements of the film, and I can understand why as it does cross the line into the uncanny valley. While the look can be a bit unsettling at first, in my experience with the film it took very little time for the visual element to stop being a distraction. It helps, of course, that Steven Spielberg brings a great deal of imagination and skill to how the story unfolds visually, packing the film with exciting scenes and great payoffs.

I enjoyed Tintin quite a bit, but it does have a few problems that keep it from reaching the lofty heights to which it aspires. For one thing, the mystery of the "Unicorn" and the search for the treasure don't really live up to the exciting action scenes that result from it and, just generally, it feels like so much effort was put into the look of the film that the development of the story and characters took a backseat. Still, it's a fun movie and I'll give the filmmakers the benefit of the doubt that the flaws of this film will be worked out so that they don't carry over to the inevitable sequel.
Posted by Norma Desmond at 8:00 AM

Spielberg may not score much points when it comes to his use of motion-capture animation here but the film still benefits from a fun and kinetic direction that brings him back to his old Indiana Jones days. Serkis is a riot the whole time as well. Great review Norma.

Serkis is truly a master when it comes to working with motion capture.