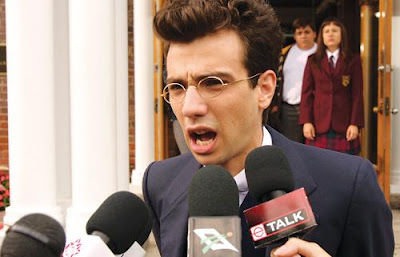 Sometimes it all just comes together. I was starting to have my doubts about The Trotsky because all the advertisements I saw seemed to reuse the same jokes, but luckily this is a case where the marketing doesn't give away all the good stuff. If you're looking for a smart, clever comedy, look no further than The Trotsky.

Jay Baruchel stars as Leon Bronstein, a Montreal teenager who is convinced that he is the reincarnation of Leon Trotsky and that his life will ultimately follow the same path. His politics exasperate his father (Saul Rubinek), whose Capitalist success makes it possible for Leon to enjoy his ideals while also enjoying the fruits of the system he opposes. After Leon tries to unionize the workers in his father's warehouse, he's given a harsh dose of reality in the form of being yanked out of his private school and enrolled in public school. Once there he finds a new cause, unionizing the students against the rule of Principal Berkhoff (Colm Feore) and his "demonic concubine" Mrs. Danvers (Domini Blythe).

Leon forms a solid core of followers including shy Skip (Jesse Camacho), and bored student union reps Tony (Ricky Mabe) and Laura (Jessica Pare), but has trouble rousing the rest of the student body into caring enough to take action. His eventual dejection in his quest to become a leader coincides with his dejection over his romantic life following his rejection by Alexandra (Emily Hampshire), a woman he is convinced he is meant to marry because Trotsky's first wife was named Alexandra and, like this Alexandra, was 9 years older than her husband. Alexandra, understandably, thinks Leon is a bit nuts and does everything she can to avoid getting involved with him, though she ultimately finds herself drawn to him time and time again.

Baruchel, an actor I like more the more I see of him, carries the film with ease. Leon is a character who could easily come off as annoying or too clever by half, but Baruchel is able to infuse him with enough vulnerability that Leon actually becomes very likeable and easy to root for. He has great chemistry with the supporting cast and he and Hampshire find a nice balance in the relationship between Leon and Alexandra so that a) it doesn't seem creepy, b) she doesn't seem unnecessarily mean, and c) he doesn't seem pathetic or delusional. I particularly enjoyed their final exchange in the film, which I would be loathe to spoil for anyone who plans to see it.

The Trotsky is a very cleverly written film that never dumbs things down. You certainly don't have to be an expert on Russian political history to pick up all the references in the film, but it definitely helps to have some cursory knowledge of the figures and movements related to Trotsky, and I like that the film doesn't shy away from that. So often films - particularly comedies, particularly teen comedies - unfold as if they have absolutely no expectations of their audience and it's refreshing to see a film that actually has some intellectual heft behind it. It definitely makes me want to see Tierney's next film - which stars many of the same actors who appear here - Notre Dame de Grace.

The film really entertained me and Jay Baruchel is a talented actor for comedies. The only thing that made me roll my eyes was the love story, because it was predictable (could it be otherwise?).

Even though the depiction of the characters' behaviour might look exaggerated, the film's humour definitely isn't often far from the truth if we think about two examples. First of all, we all know someone who criticizes (or criticized) "capitalism" while enjoying the wealth of their parents. Secondly, I'm sure I'm not the only one who, in High school, saw students walk out of class just for the sake of it. All in all, it's a charming comedy because its tone is as honest (and irreverent) as that of the TV series Party Down.

PS: Nice review, by the way.

I've been wondering about this movie and your review just sold me on seeing it. I love Jay Baruchel and I'm happy to hear the script is so smart! I hope it comes here soon but I'm not sure about its American release.

@Anh Khoi Do: I agree that it's strength is those grains of truth that it works with. Though the story ends up playing out on a large scale, the characters themselves are very believable.

@Alex: I hope it does manage to play in the US, though I've heard it might go direct to video. Hope you get to see it, somehow, at some point!