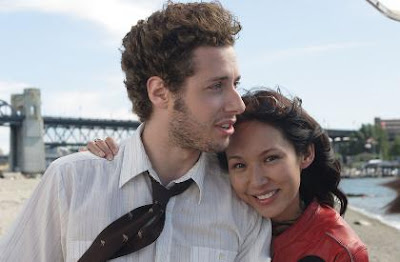 Douglas Coupland is a great writer, but I'm not sure that his particular style of humor translates that well to the screen. Dialogue and events that might seem funny on the page sometimes fall flat on the screen and that seems to be the case with Everything's Gone Green. Although some of it works well, the film never really seems to pick up steam and get off the ground.

The story centers on Ryan (Paulo Constanzo), a guy without ambition drifting through a dead end job. When he loses that job, he gets another with the lottery commission, doing interview profiles with the winners for a magazine devoted solely to the subject of the lottery. As part of his training he's sent to community college to learn Mandarin, where he meets Bryce (JR Bourne), who just happens to be dating Ming (Steph Song), a woman Ryan met by chance and to whom he's deeply attracted. Though he finds Bryce to be generally repulsive, Ryan nevertheless allows himself to get roped into a money laundering scam that Bryce will oversee. All Ryan has to do is pass the names and contact information of winners on to Bryce, who will then go to the winners and buy the tickets from them so that the winnings can be claimed by the Japanese mafia. Ryan is nicely compensated for his role but eventually has a crisis of conscience prompted less by his own moral code than by rejection from Ming.

Everyone in the story is working an angle of some kind, cutting corners to get ahead and make life more comfortable. Ryan's mother (Susan Hogan) and recently laid off father (Tom Butler) have started a grow op in the basement. Ryan's brother is engaged in a real estate scheme. Bryce officially works as a golf course designer, though the courses he's made aren't actually condusive to playing the sport and are just another part of his work for the Japanese mafia. There's an artificiality to the way that Ryan and the people around him are living, ostensibly doing one thing, but secretly doing another. This element of the story is underscored by Ming, who works as a set designer and spends her days dressing up Vancouver to make it look like other cities. Nothing is real or genuine; everything is an illusion.

There are a lot of similarities between the film and jPod, the TV series based on Coupland's novel of the same name. I liked jPod a lot (the series; haven't read the book) but couldn't muster the same affection for Everything's Gone Green. I think that perhaps it's a case of too much plot in too compressed a format; there just isn't sufficent time to properly explore all of the elements that the screenplay offers up and the result is that not only do you feel like the story doesn't really have much of a pay off, but also that many of the characters are too thin to care about.

Though I liked the performances by Constanzo and Song, I didn't really feel like they had much chemistry together. Part of the problem might be that the film itself is so curiously low on energy that everything seems muted, but I found it kind of difficult to care whether Ryan and Ming ended up together and since Ming is the catalyst for Ryan's change from a slacker who doesn't care about anything to a guy who doesn't want to take the easy way, that's kind of a big thing. Everything's Gone Green isn't a bad movie, but it doesn't really rise to the occassion either.

What I didn't like about this movie is how the whole drug thing is just kind of sprung on the audience and comes out of nowhere (I had no idea what this movie was about before I watched it) and nothing really is done with it. It's kind of just ha ha mom and dad sell drugs and you're right, it's hard to care.

Don't worry, you'll get a good Canadian flick one of these times ;)

Yeah, too much plot and not enough time to explore all of it.