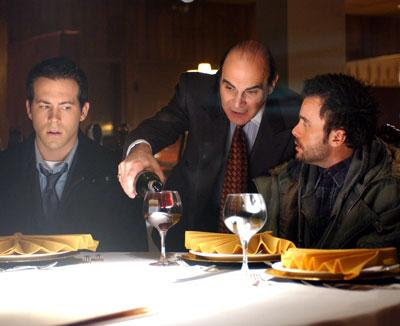 If you ever come up with some great scheme, don't name it "fool proof." That's just asking for trouble. Also, if you're going to write your great scheme down, maybe you should leave it a safety deposit box or some other secure place rather than in a gym bag in your apparently easy to break into apartment. Just saying.

Foolproof centers on three friends - Kevin (Ryan Reynolds), Sam (Kristin Booth), and Rob (Joris Jarsky) - with an unusual hobby. Together they plot out the logistics of breaking into a place and stealing something valuable. They spend countless hours over the course of a few weeks staking a place out, becoming familiar with its security, and creating a replica of the layout along with the security system inside a warehouse, for the thrill of theoretically pulling off an awesome heist. They never actually put these schemes into action, mind you, they just come up with very detailed plans for how they would do it.

The leg work they've done on their latest plan hasn't gone unnoticed, however, and soon they find themselves having to contend with Leo Gillette (David Suchet), a legendary con man who blackmails them into working with him on a real heist. At first all three are reluctant but Leo is able to play on Rob's odd man out status to cause dissent amongst the friends which in turn leads to a few double crosses and betrayals and reversals of fortune. Some of the twists you can see coming from a mile away and I'm not quite sure I believe the final one, but for the most part the screenplay by William Phillips (who also directs) is pretty solid.

Because the story itself isn't anything particularly revolutionary - it's very much a genre film and the plot movements will be familiar to anyone who has seen a heist movie or two - much of the film's success depends on the chemistry of the actors. Foolproof is very lucky in that regard because the actors work off of each other very well and in a believable way. Suchet is appropriately intimidating as Leo, his personality towering over that of the other characters. Reynolds, Booth and Jarsky have good buddy chemistry, though the romantic chemistry between Reynolds and Booth is nonexistent, making their eventual, inevitable kiss a non-event of epic proportions. Still, as friends, they're perfectly believable.

At the time of its release in 2003, Foolproof was something of a fiasco, a financial disaster with a big (for a Canadian film) production budget as well as a big marketting budget that ended up grossing about 0.5% of its budget back. Released between the first two Ocean's films, it may simply have seemed like another example of the Canadian film community producing low-rent versions of American product, tapping into a feeling a self-loathing and thereby alienating its would-be core audience. Seen apart from that socially fraught context, Foolproof proves to be a perfectly serviceable film. It is not overly ambitious, but it achieves what it sets out to do and does so in an entertaining way. I recommend it.

Added it to my rental queue - sounds intriguing. Reynolds is normally watchable and Suchet's a great actor who isn't in enough feature films. Nice review.

Hope you like it. It definitely exceeded the expectations I had going in.

you are on a ryan reynolds kick