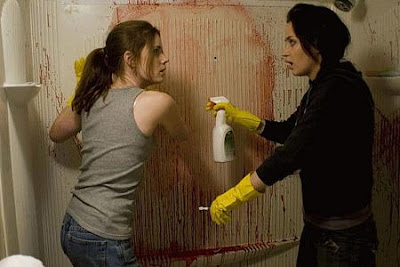 Watching Sunshine Cleaning I couldn't help but feel like I was seeing a good movie that had been taken to the editing room and hacked away at until it was merely competent. Anything that can be safely filed away under the heading "routine" remains and anything even remotely different or interesting has been cut down to the point of barely qualifying as subplots. It's a shame, too, because the film is carried by two of the more skilled and likeable young actresses working today and this ends up feeling like a waste of their talents and time.

Amy Adams and Emily Blunt star as Rose and Nora, two sisters still struggling to deal with the pain of their mother's suicide when they were children. Rose is a single mother with a young son and has been carrying on an affair with her high school boyfriend, Mac (Steve Zahn), and Nora is generally surly and hard to get along with and lives with their father. The father is played by Alan Arkin and is the kind of character whose heart is always in the right place but who often does more harm than good, the type of role that is in danger of becoming known as "the Alan Arkin role in movies with Sunshine in the title." Rose has been working as a maid and seizes the chance to make better money by moving into a more specialized cleaning service dealing with the aftermath of crime scenes. She talks Nora into joining her in the venture and, thus, the eponymous Sunshine Cleaning is born.

Much of the plot you can probably guess. One sister is responsible and has always carried the burden of taking care of the other, the other is a bit wild, a little shiftless, and kind of resents being "taken care of" even though she continuously shows that she's not particularly responsible. The child is young and precocious. The father is old and precocious. The married boyfriend is never going to leave his wife, who knows about the affair and engages in the tried and truce blame-the-other-woman-but-let- the-husband-off-without-so-much-as-a-scolding dance. The sisters have difficulty working together at first, and then find their groove, and then everything falls apart because the responsible one makes the mistake of relying on the less responsible one. Lather, rinse, repeat.

There are two interesting developments that end up being left, well, underdevelopped. During one of their first jobs, Nora finds photos of the deceased's daughter and rather than throwing them out, decides to track her down and return them to her. When she catches up with Lynn (Mary Lynn Rajskub), Nora can't think of how to explain the situation and instead tries to develop a friendship with her, which Lynn misinterprets as romantic interest and, of course, ends badly. The other plot involves Winston, the owner of the store where Sunshine Cleaning gets its supplies. Played by Clifton Collins Jr., he is far and away the most interesting character in the film and there are suggestions that he and Rose may get involved, but nothing really comes of it. In fact, very little comes of anything in this movie and the ending feels like something thrown together rather than something that comes organically out of the story.

Adams and Blunt do what they can with their characters, but the film allows them very little room for growth. The story feels more like a series of individual moments strung together rather than, you know, a "story" - which can work in some films, but not in this one. The actors work hard to anchor the narrative but it seems like a wasted effort because the film ends up being so aimless, puttering itself out rather than driving towards its conclusion. It ends the way that it does not because it needs to end there but because it needs to end somewhere and there is as good a place as any.

Posted by Norma Desmond at 8:38 AM

That makes me so sad. I really wanted to love this movie, but I've been hearing it's just mediocre. Too bad. It's coming out in Germany next week so maybe watching it in German will give me a little added satisfaction? Or additional confusion.

Yeah, I really wanted to like this one too which is maybe why I was so disappointed with it. It has a few good moments, it just doesn't hold together that well.