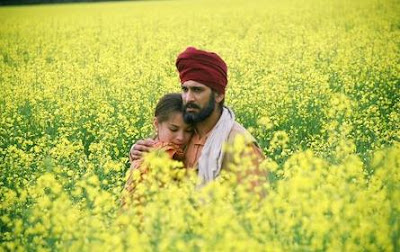 God, I don’t even know where to start with this one. It begins promisingly enough as a story about the violent division of Pakistan from India but quickly devolves into a maudlin love story surrounded by religious intolerance and wise but powerless Brits who can only cluck their tongues at what has become of the jewel of the empire. On the plus side, it at least looks really great.

It begins in the days of the raj when Gian (Jimi Mistry) and Avtar (Irrfan Khan) are officers in the army, serving under the command of the young and doomed Andrew Stilwell (Jesse Moss). In the carefree hours before shipping out, the three spend time with Stilwell’s sister Margaret (Neve Campbell) and her friend Walter (John Light), enjoying what's left of the apparently idyllic days of British rule. In the years to come Gian will feel forever bound to Margaret because of what happens to her brother, but that’s really neither here nor there as the story soon splits off in another direction entirely.

Flash forward to 1947 when the British have ceased their occupation but the country is carved up into secular India and Islamic Pakistan. A group of Muslims is making the trek towards the border and is set upon by Sikhs out to slaughter them. In the chaos, Naseem (Kristin Kreuk) is separated from her family and trapped on the wrong side of the border. Gian finds her and hides her in his home, but it isn’t long before the rest of the community discovers her presence and begins demanding her blood. Gian is determined to keep her safe and, eventually, the his neighbors just come to accept her and even celebrate when she and Gian marry and have a son.

Prior to falling in love with her and marrying her, Gian had made efforts to reunite Naseem with her family and sought Margaret’s help in working through the governmental red tape. Now, years later, Margaret has finally been able to make some headway and arrangements are made for Naseem to visit her family and then return to Gian and their son. Things go awry when her brothers learn of her marriage and lock her up so that she can’t leave. Now Gian must find a way into Pakistan to bring her back.

The main problem with the film is the story itself, which aside from being trite is also quite disjointed. The pieces of the narrative don’t fit easily together and the shoehorning of British characters into the story feels forced and unnecessary. Further, as an exploration of the cycle of violence that came out of the partition, the story utterly fails. The Sikhs hate Naseem until they don’t. The silent villain who is constantly lurking near Naseem during the first half conveniently disappears during the second. Naseem’s brothers are so happy when they’re reunited with her that they would rather she hate them than return to her Sikh husband. But why? The characters are at the mercy of the plot, motivated by nothing except what the story needs them to do at this juncture or that. It’s all surface without any real attempt to go deeper and look at the roots of the problem.

There are other problems as well, not least of which is that Campbell and Kreuk seem to be in a contest to determine which of them is more miscast. The only thing that’s really of note in a positive way is the absolutely gorgeous cinematography by Vic Sarin, who also directs and co-wrote the story (I suppose 1 out of 3 isn’t bad). The landscape looks lush and vibrant and the actors are all beautifully photographed. It’s one of the best looking films I’ve seen in a while, it’s just too bad about the rest of it.

"The landscape looks lush and vibrant and the actors are all beautifully photographed. It’s one of the best looking films I’ve seen in a while, it’s just too bad about the rest of it."
I can't disagree with you "for entertainment's sake", just to quote a Bud Light commercial that plays during the NHL playoffs. As you pointed it out, the movie just stays on the surface. The problem that I had is that the film doesn't rely quite well on dialogues to show us how Gian and Naseem manage to overcome their religious barriers to love each other.

That's exactly it. The movie doesn't bother to show us how the characters overcome their prejudices regarding each other and instead just has them suddenly feeling love, hate, whatever with no build up and no payoff.

The characters don't have prejudices; that, in and of itself, is what makes their romance so powerful and anchors the movie. They both realize that the other is an individual, not the figure head of the religious atrocities.