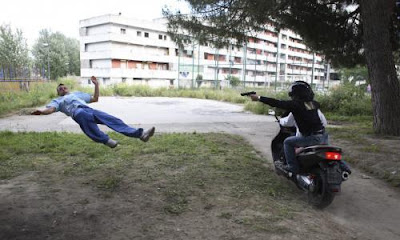 There is no glory in Matteo Garrone’s crime epic Gomorra, save except those glories the characters recall from Hollywood mob movies. This is a film about the bottom rungs of a crime syndicate, men (boys, many of them) who struggle to achieve little more than survival as those around them are gunned down in a war that can perhaps be best compared to WWI – a river of blood shed for one inch of ground. It is a dark and thoroughly unsentimental masterpiece.

The story follows the fortunes of five men and one boy involved in organized crime: Don Ciro (Gianfelice Imparato), a middleman whose days are occupied paying out money to the families of incarcerated members of the Camorra crime family; Pasquale (Salvatore Cantalupo), a tailor whose skill is essential to the success of a Camorra controlled firm; Roberto (Carmina Paternoster), a young man who has been taken under the wing of Franco (Toni Sevillo), who makes his living illegally dumping waste; Toto (Nicolo Manta), a teenage boy taking his first steps into the underworld; and Marco (Marco Macor) and Ciro (Ciro Petrone), two young men who are playing at being big league gangsters. During the course of the film, all six will find themselves at a crossroads, forced to make a choice which will determine whether they live or whether they’ll join the ever growing ranks of the dead.

The world Garrone depicts is distinctly unglamorous. Much of the action takes place in the decaying tenement where many mob families live and which seems to be ground zero for the two factions warring for power and control. Don Ciro is a frequent visitor, an unimposing figure who looks more like an accountant than a gangster and becomes increasingly skittish as he realizes just how expendable he really is. One of the people he calls on is Maria, the wife of an imprisoned mobster whose son has broken away with the rebelling faction. Because her son has betrayed the Camorra, Don Ciro is no longer allowed to include her on the payment list and the remaining loyalists are trying to force her out of the tenement. She lives in fear, never leaving her home and allowing few people inside. Toto, who delivers her groceries, is one of the few people she trusts – a fact which puts both of their lives in danger. The tenement is a war zone where people die for little or no reason, where nothing ever seems to be gained by those deaths except a reason for to continue the cycle of violence.

One of the striking features of the film is that for all the seriousness inherent in the many violent deaths which take place, many of the characters seem to consider their lifestyle as an aesthetic choice. The younger characters are all about image, visiting tanning salons, getting manicures, plucking their eyebrows; concerned with how they look, not with the meaning of their actions. Marco and Ciro are obsessed with Scarface and spend their time play acting as Tony Montana. Their immaturity is in stark contrast to the seriousness of their actions – namely, finding and stealing a cache of mob weapons – which makes their fate all the harder to bear. I’m accustomed to seeing people die in horrific ways in movies, particularly crime movies, but there’s something so profoundly disturbing about the way Marco and Ciro scream and cry when the mob catches up with them and gives them a “warning” to stop messing around. These are just kids, in way over their heads, unable to separate reality from fiction, truth from image.

The film is based on a book by Roberto Saviano which depicts the various crimes of the Camorra crime syndicate and the way those crimes are connected to legitimate ventures all around the world. Because the film takes no pains to romanticize mafia life and does nothing to set these gangsters up as figures to be admired, it feels markedly real. Characters don’t live in this film because they’re required to by filmic conventions; they live because they make the right choice at the right moment. Not everyone recognizes their moment and so they fail to escape from the violence which will, later if not sooner, catch up with them as it has with everyone else. The film is brutal not because it is full of blood and death, but because it acknowledges that the deaths are entirely wasteful, the result of petty squabbling, half-baked power grabs, and sometimes sheer idiocy. It is a hard, uncompromising film that leaves no room for sentimentality.

I couldn't have said it better myself (although I tried). This movie is fantastic.

Agreed. I was totally blown away by it.