Canadian Film Review: The Saddest Music in the World (2003) 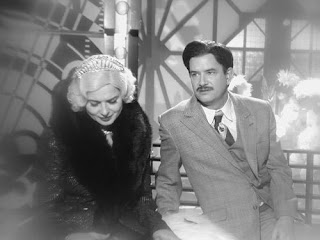 Guy Maddin’s surrealist masterpiece The Saddest Music in the World may very well be the best Canadian film ever made. It defies the simple definitions imposed by genre keywords and stylist descriptors and delivers something truly unique. Isabella Rossellini, Mark McKinney, Maria de Medeiros, David Fox and Ross McMillan appear in the film, but the real star is Maddin himself, whose guiding hand isn’t hidden within the material but comes vehemently to the foreground, shaping and smashing the film’s images before our very eyes.

The film is designed to look as if it’s a lost classic that has been rediscovered and restored, but it’s aesthetic (which evokes both the silent era and the early Golden Age Hollywood era) is mixed with a post-modernist reflexivity. The plot concerns the commodification of genuine emotion and its subsequent mutation as it becomes a product for the masses, and we are consistently made aware of the construction of emotion and the construction of the context in which emotions are presented. We are kept at arm’s length from this film, not meant to really feel for the tragic circumstances of the characters, even those that in any other context would easily elicit our emotions.

The Kent family, who occupy the center of the narrative and consist of Chester (McKinney), Roderick (McMillan) and their father Fyodor (Fox), have experienced real tragedy, but it is presented in an overtly stylized way which prevents genuine identification and feeling from the audience. The family’s matriarch dies when Roderick and Chester are young boys (and, importantly, while the family is playing music together), Roderick’s son dies and his wife disappears, and Chester and Fyodor’s battle for the affections of Lady Helen Port-Huntley (Rossellini) results in an accident which leaves her without legs.

The brothers are set up are polar opposites. Both grow up to become ex-patriots, with Roderick going East and becoming a Czech known the world over as Gravillo the Great, and Chester becoming an American, joining the ranks of the most “Western” of Western peoples. Chester is presented as someone who lacks the ability to connect to emotion – he feels no guilt over Lady Port-Huntley’s accident, feels no sadness for Roderick’s loss of wife and child, seems to feel nothing for his lover, Narcissa (de Medeiros) – but is able to recognize the marketable potential of real emotion. Roderick, on the other hand, is someone who connects only to extreme emotions, so extreme in fact that the world has become too much for him and he wears a veil to protect himself from the light, is driven to distraction by the rumbling of a stomach in the crowded audience, and recoils from even the lightest touch. Fyodor falls somewhere in between the two poles, able to feel real emotion like Roderick, but, like Chester, he is also able to construct a presentation of emotion that is most likely to engender the desired response.

All three come together and compete (each representing their respective nations) in a contest being held by Lady Port-Huntley to find the nation which has the saddest music in the world. However, the real goal of the competition is for Lady Port-Huntley to promote her beer and make people sad enough that all they want to do is drink it (“If you’re sad and like beer, I’m your lady”). The competition is presented as a circus of the grotesque with the participants trying to out-do each other in head-to-head showdowns until one is declared the winner and must then descend a slide into a pool of beer. Meanwhile, two overly upbeat commentators punctuate the competition with play-by-play observations like “No one can beat the Siamese when it comes to dignity, cats or twins.”

It eventually comes down to Chester and Roderick, Chester having risen to the top not by performing, but by constructing a show around the “sadness” and by amalgamating into his own team those who have already been eliminated and those he’s able to intimidate into dropping out. In the final showdown, Lady Port-Huntley herself participates in Chester’s big show, showing off the new set of legs that were made for her by Fyodor – glass legs filled with beer. Now not only is she making pain a commodity, but she has allowed her physical self to become a product as well.

There is a lot going on in this film and it can be difficult at times to feel like you’ve got a firm grasp on it, but Maddin skilfully guides all the elements, deftly merging the comedy, drama and absurdity of the story. The cast is wonderful, especially Rossellini who finds just the right note between madness and ridiculousness. McKinney is occasionally problematic as Chester, seeming to skirt above the material rather than engage with it, but in certain respects that works. Chester is, after all, not really “there,” but a product of the smoke and mirrors showmanship that marks his act. Like the sadness in the competition, his self is not real but a parody of the real.

This is a startlingly original film, both unwieldy and graceful, ugly and beautiful. Once you see it, you won’t be able to get it out of your head, it’s fiercely constructed images echoing back to you. Even if you aren’t sad and don’t like beer, this just might be the movie for you.

Posted by Norma Desmond at 7:31 PM