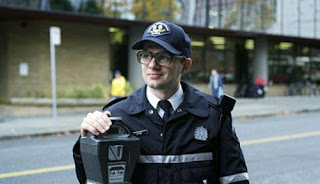 The Delicate Art of Parking is a funny and surprisingly touching film about people who take their jobs seriously in the face of ridicule and scorn from others. It’s shot in the mockumentary style favoured by Christopher Guest and, like the films of Guest, often veers to extremes of comedic absurdity. But, also like Guest, writer/director Trent Carlson obviously has a soft spot for his characters which provides them with enough humanity to ground the film firmly in reality.

The story begins with Lonny Goosen (Tiefenbach), a documentary filmmaker whose next subject is meant to be an exposé parking enforcement, inspired mainly by Lonny’s staggering number of parking tickets and his assertion that officials have not right to give people tickets. While shooting footage for the film, Lonny and his crew witness a man attack a parking officer, who will go on to be the hero of the film. This is Grant Parker (Ewanuick), a nebbishy guy who believes that he’s doing a public service, even though he understands that the public dislikes it. When asked about the attack, he informs that it’s happened before about six times. But, he points out, since he’s been on the job for seven years, that averages out to less than one attack per year. Grant is a character wonderful in both conception and execution. He takes his job very seriously, clinging fiercely to its regulations. “Some people just don’t finish their park,” he informs us as he measures the distance between the curb and a car, determining that the car is about an inch or two short of regulation. For both the film, and the film within the film, Grant starts out as a figure of fun. But, slowly as the story progresses, he becomes a character that we take seriously, a character of depth and intelligence who simply loves his job.

In the man on the street interviews, we see that parking officers are pretty much universally hated and that people have no respect for what they do. Many, in fact, express their hatred not of the fact that they got a ticket, but of the parking officials themselves., who are mostly seen as somehow not being human. When one parking officer is said to have been run-down by someone to whom he gave a ticket, the general response is that it’s kind of funny, and a few even offer that the officer had it coming. The officer who was run down, it turns out, is Grant’s mentor, Murray. Following the accident, Lonny finagles his way into Murray’s house (which is, actually, his mother’s house) and we see photos of Murray, whom we can’t help but notice looks like an older version of Grant. Like Grant, Murray is treated at first as a figure of fun. “He didn’t graduate high school,” his mother tells us. “To me, he graduated… he graduated shop.” But, by the end of the film, when we’ve learned more about Murray and the circumstances leading up to his accident – a mystery which Grant and Lonny spend most of the film trying to untangle, resulting in some of the film’s funniest and most touching scenes – he, too, is more human to us.

The film’s message is neatly summed up for us by Grant’s friend, Jerome (Tony Conte), who tells us that you have to respect what someone chooses to do, because that’s their life. We might think it’s funny that Grant takes parking enforcement so seriously, but it obviously means something to him. Lonny, certainly, thinks Grant is the punchline to the joke of life… until Grant turns things around on him. What is it, exactly, about Lonny’s job that makes it so important? What does it provide to the rest of the world? What makes it worthy of respect. Lonny insists that his job is worthwhile – though his cameraman points out that he’s never actually finished a film. Lonny stutters and sputters and ultimately can’t come up with any real reason beyond the fact that being a filmmaker is obviously cooler than being a parking officer. This is the turning point in the film, when it shifts its sardonic eye from Grant to the world at large and asks us why we do what we do, and why we think it’s important.

Ewanuick is very good, finding the right balance in the character so that we can both laugh at him and cheer him on. Some of the funniest moments, however, come courtesy of the supporting cast playing the other parking officials, one of whom, when asked what can be done to improve parking officer-public relations, suggests that tickets be laced with a mild sedative. This is a very funny movie, perfectly paced and well-plotted. And for a film about people doing a job that is naturally and automatically despised, it ends on a remarkably triumphant note.

Posted by Norma Desmond at 6:39 PM