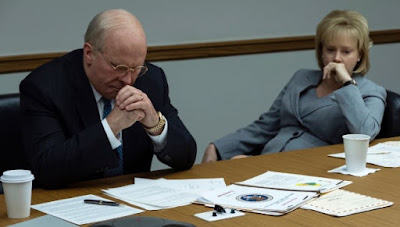 I'm going to start at the very end, because I think the film's mid-credits scene exemplifies the ways that it ultimately fails itself. Earlier in the film there is a scene in which the government runs a focus group to test out the efficacy of its version of newspeak, where terms like "enhanced interrogation" replace "torture." In the mid-credit scene the film returns to the focus group, with one man decrying the film's liberal bias and shooting down another man who counters by stating that the film is just using "facts" by calling him a Hillary supporting "libtard." As the argument escalates into a physical fight, the camera moves to two other members of the focus group, one of whom confides that she can't wait to see the new Fast and Furious movie. We're made to understand that this woman is an idiot, as is the guy who called the film liberally biased, and that the man who cited "just the facts" is the lone voice of reason and intellect in the room. This is flagrantly self-aggrandizing because it outright declares that writer/director Adam McKay considers his work to be more intellectually challenging and therefore "better" than commercial ventures like The Fast and the Furious. He's highbrow, not lowbrow, is what this scene is saying. McKay, a producer on both of the Daddy's Home movies, thinks he's above of the makers of The Fast and the Furious movies as well as the audiences who enjoy them who, presumably (given the tenor of this scene) would be incapable of enjoying his own work. Are The Fast and the Furious brilliant cinema? Hell no. They are absurd. They also entertained me, which is more than I can say for Vice.

As for the "liberal bias" versus "facts" part of the scene, the implication that the inclusion of "facts" means the exclusion of "bias" is, at best, intellectually dishonest and, at worst, lazy. Something can be both factual and biased depending on which facts it chooses to include. For example, the only Democratic presidency that the film chooses the acknowledge is that of Jimmy Carter, presumably so that it can include a scene of Carter implementing the use of solar energy, followed later by a scene in which the Reagan administration has those same solar panels ripped up and tossed aside. The meaning of those dual images is that conservatives refuse to move away from reliance on finite energy resources. The issue isn't that that's not true, it's that when you take those images into account in conjunction with, for example, the film's heavy criticism of the Bush administration for human rights violations like imprisoning people indefinitely and without charge in Guantanamo Bay, while failing to acknowledge that Guantanamo is still open despite 8 years of the Obama administration, it reveals a bias towards expounding on the moral failings of the Republican party while glossing over the moral failings of the Democratic party (except for one brief moment when it shows Hillary Clinton supporting the invasion of Iraq because of course). And this is all to say nothing of the fact that the film, through it's "these are just the facts" character, is arguing that it's just presenting the truth even though the title card that opens the film acknowledges that the truth (ie some of "the facts") can never fully be known because Cheney was so secretive in what he was doing and so effectively covered his tracks (the film's exact words are "We did our fucking best").

Cheney operated in the shadows of the Bush administration and Vice can do nothing, really, to illuminate him. It depicts a young Dick Cheney as a ne'er do well who seems content to waste his life drinking and fighting until his girlfriend, Lynne (Amy Adams), makes it clear that she's not going to stick by a loser with no ambition. He pulls himself together because he doesn't want to lose her and six years later he's got a job as an intern in the Nixon administration, where he's taken under the wing of Donald Rumsfeld. During the Ford administration Cheney rises to the position of Chief of Staff, during the Reagan administration he's elected to Congress, and during the Clinton administration he enters the private sector and becomes CEO of Halliburton. Vice makes a point of the jobs that Cheney holds, but it never manages to tell us much of anything about the man himself. The character is a cipher who, even in the moments when he's being actively manipulative, such as a scene in which he talks George W. Bush (Sam Rockwell) into handing over all the power of the presidency to him, does not seem to be driven by anything in particular. He's ruthless simply for the sake of being ruthless, wants power simply for the sake of wanting power, and seems to have no real reason for doing any of the incredibly destructive things he sets into motion except to see if he can get away with it.

Moreover, the film does absolutely nothing to develop the character from drunken wastrel into ruthless power monger, unless we're meant to infer that Lynne, depicted as having a sense of purpose greater than the limits of what she believes she will be able to accomplish because of her gender, simply molded him like clay into the man who could satisfy her craving for power - although that still implies that he's merely a blank content to accept the personality someone has made ready for him. The jumping in and out of the timeline and the various stylistic devices the film employs are perhaps meant to disguise the fact that the film itself doesn't have a handle on who this man is, but it doesn't succeed at doing that. You emerge from this film with no greater understanding for who Dick Cheney is than you came into it with. The only thing that actually stuck with me is how brutally casual the character is about it whenever he realizes that he's having a heart attack. By the third of fourth one he begins announcing it with the nonchalance of someone giving you the time, and this is more a credit to Bale's performance than to the film itself.

Despite having so little to work with on a story level, Bale still manages to deliver a great performance beneath however many pounds of makeup were required to make him resemble Cheney. What comes across in Bale's performance is the notion of the banality of evil taken to its greatest extreme, of a man who does things that have terrible consequences for the rest of the world but is still capable of glimmers of humanity which suggest an emotional life, despite the film's assertions that he's as heartless (literally, as in one shot that lingers on his empty chest cavity when he's having a heart transplant) as he is power hungry. Adams also manages to do a remarkable amount with Lynne, who doesn't come across as a shrewish wife so much as a woman frustrated by how many extra obstacles are in her way despite how much more capable she would be at the job than some men (though, make no mistake, she's still one of those mind boggling "every women should stay in the kitchen except for me" types). Accepting that she can't achieve her own ambitions, she channels them into shaping her husband and, later, her eldest daughter. Despite how superficial the film is, these performances, somehow, are not.
Posted by Norma Desmond at 12:36 PM