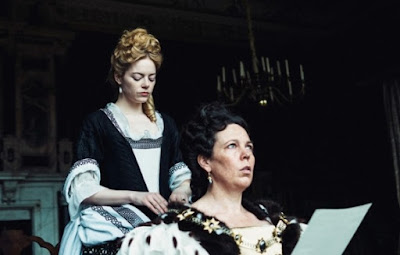 It's a testament to how weird Lantimos' films typically are (I'm only basing this on Dogtooth, The Lobster, and The Killing of a Sacred Deer, but I'm willing to bet that his earlier works are all bizarro, too) that The Favorite is easily his most straightforward. It's set in 1708 and, per usual in centuries earlier than the 20th, Britain is at war with France. The British army is led by the Duke of Marlborough whose wife, Sarah (Rachel Weisz), is the Queen's closest confidante, much to the chagrin of Robert Harley (Nicholas Hoult, way too young for the part by such an acid delight in the role that it doesn't matter), the leader of the Opposition who wants the government to stop spending on the war. Into this war of influence comes Abigail Hill (Emma Stone), Sarah's down and out cousin (you wouldn't know it from the film, but in real life Abigail was also a cousin to Harley, because every British aristocrat has some degree of cousinship with every other British aristocrat if you go far enough down the family trees), whom Sarah agrees to take in as a servant.

Abigail's arrival is ignoble (she arrives covered in mud, having been shoved out of a carriage by a character credited as "Wanking Man") but her rise is swift in part because for all Sarah's posturing as a master game player, she somehow doesn't see her cousin's maneuvering until it's too late. Still, the more experienced courtier is confident in her ability to outplay all rivals (be they nobodies from nowhere like Abigail, or men with certified political power like Harley), secure that her bond with the Queen is so strong that it cannot be broken ("No one but me would dare," she states when the Queen, whom she always addresses by name rather than title, is convinced that someone called her fat and ugly) and that no one can come between them. And why shouldn't she be? In the opening minutes of the film Anne is gifting her with Blenheim Palace, a place grand enough to be fit for royalty and rather a great extravagance given that the Queen is on the verge of having to raise taxes to pay for the war, and Sarah seems to be the only person with whom Anne shares any degree of intimacy, her children all having died, her husband presumably dead given his lack of mention throughout (though, in reality, Prince George was still alive until October of 1708). As the film opens, the only living thing that Anne loves other than Sarah is the 17 rabbits that represent her 17 lost children.

Sarah wields her power rigorously, if not necessarily wisely, dominating her relationship with Anne where Abigail chooses the path of obsequiousness, ingratiating herself and then using the information that she has learned to usurp Sarah's place in both the Queen's heart and her bed. The sexual aspect of the dynamic - which might sound anachronistic, but after falling out of favor Sarah Churchill really did accuse Queen Anne of having a sexual relationship with Abigail - sharpens the battle for power in the story because it reduces the power held by the men around them and elevates the women beyond their lack of legal personhood. Men like Harley have the type of power that can be seen, demonstrated in a scene in which Anne address Parliament and he manages to preemptively congratulate her on not raising taxes to fund the war, putting her in an awkward position because she was going to announce that she is going to do just that, leaving her at such a loss that all she can think to do is pretend to faint to buy herself some time. While Sarah and Abigail don't have official political power - Sarah herself cannot go into Parliament but can only hover outside its doors - their influence with Anne nevertheless represents the real power over the throne, which begins to waver back and forth between supporting the Whigs and the Tories once Abigail makes an alliance with Harley. This is a center of power from which men are entirely exempt, played out not in the public view but in private, often only between the three players themselves.

The back and forth (and back) between the three women, and the way that it affects the political balance of power around them, is fascinating thanks to the razor sharp screenplay by Deborah Davis and Tony McNamara (I think this is easily the best written screenplay of the year for the dialogue alone) and the central performances. Weisz and Stone each find different takes on the "grasping favorite," finding different ways to express each character's desire for and comfort with the power they want to attain (Weisz's Sarah is so comfortable in power that she wears it like an old pair of shoes, but deeply vulnerable, even wounded, when it slips away from her; Stone's Abigail enters the power game like someone uncertain of what she's doing and afraid of taking a misstep and then, once she achieves power, seems to think that she has to "perform" it in order for it to be real) and both deliver fantastic performances. Colman, finally getting her big moment after years spent mostly in the supporting ranks, is a marvel as Anne, who despite the film's focus on some of her worst qualities (her capacity for tantrums, her desire for instant gratification) nevertheless comes through as a character worthy of sympathy. The performance is driven by the loneliness at the character's core, with her willingness to be manipulated informed by her longing for companionship and love. While The Favourite sometimes rises towards the absurd (did 18th century nobles really entertain themselves by racing ducks? After seeing this, I would like to think they did), it's the human element brought to the screen by Colman that makes the film's cuts feel so deep.
Posted by Norma Desmond at 8:00 AM