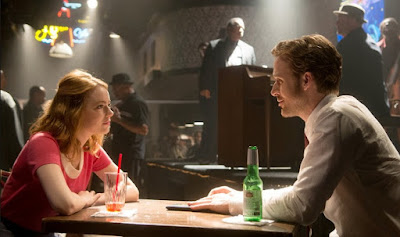 Sometimes all that matters is how a movie makes you feel. At a time of year when just about everything at the cineplex, and some of the things outside of the cineplex, is just so heavy, a movie like La La Land, so light, so breezy, so determined to win your affection, is sometimes exactly what you need. By no means a film without flaws, it's nevertheless an utter charmer that put a smile on my face more times than I could count and left me feeling better about this crazy world of ours than any other film I've seen in months. From an opening which hearkens back to Hollywood's past by promising a picture in CinemaScope before moving into a lively opening number set during a traffic jam, to a finale which lovingly references An American in Paris, Funny Face, and Singin' in the Rain, with a seemingly endless list of things in between that manage to be adorable for their worship of old Hollywood rather than annoyingly precious, La La Land is a film that's in it to win you over and does so fairly easily.

The bulk of La La Land takes place over the course of a year, each season marked by a shift in the relationship between the two main characters, Mia (Emma Stone) and Sebastian (Ryan Gosling). It's winter when they first meet, though you might not know it from the sunshine all around them, but their encounters are fleeting - a honked horn and a flipped bird while stuck in traffic, and then later an attempt by one to compliment the other on a performance, rudely brushed off. In spring they meet properly and begin to develop a friendship, which of course turns to love and a romantic relationship. They are united not just by being young and beautiful, but by the fact that they're chasing dreams: Mia is an aspiring actress frustrated by the endless stream of fruitless auditions she's been on and Sebastian encourages her idea to write and stage her own one woman show to try to attract the attention of casting directors. Sebastian is a jazz pianist who wants to open his own club so that there can be a jazz club in Los Angeles that's doing things right and showing proper respect to the music, and Mia encourages him in his efforts to make that happen.

Stories about aspiring artists, particularly those set in Hollywood, are a dime a dozen; there are certain tropes that are so much part of the fabric of those kinds of stories that you can't escape them and it's hard, in light of that, to be original. La La Land isn't especially concerned about being original, borrowing left, right, and center from older films (primarily Hollywood in the '40s and '50s, but the film also owes more than a small debt to Jacques Demy's 1964 Umbrellas of Cherbourg), overtly or implicitly referencing something else in what seems like every scene. Yet for all the ways that La La Land is a flight of fancy that spins you through past glories, it's also a film that has a solid emotional grounding. Mia and Sebastian are artists and dreamers, but the film doesn't pretend that dreams can come true simply by dint of having them. The desire may be pure, but to make those desires a reality will require compromise - Sebastian takes a job playing keyboard in a band for his friend, Keith (John Legend), even though the band's EDM/jazz fusion take goes against the purity of form he's striving to preserve - and it will also require sacrifice. As their paths to success increasingly diverge, one of those sacrifices for Mia and Sebastian may very well their relationship itself.

Although there are things about La La Land that are ill-thought out - like the fact that Sebastian is a white guy presented as the only person who really understands jazz and who appreciates it on a purer level than, say, the black jazz musicians around him, which taps into the age old problem of white people appropriating a form of black culture and then claiming it as their own and excluding black people from it; and the fact that while both Mia, as an actress, and Sebastian, as a musician, are participants in the creation of culture, Sebastian, as someone who wants to preserve artifacts of jazz history, is also cast in the role of curator of culture, entrusted to decide what is "valuable" and what is not; I would also say that if you cast Rosemarie DeWitt, who appears here as Sebastian's sister, in a film that's just over 2 hours long and only have her appear on screen for about 3 minutes of that time, then you're guilty of not knowing what you have in an actor like Rosemarie DeWitt - so much of it is so charming and so delightful that you want to forgive it its faults. How fair would it be, after all, if it was perfect on top of everything else?

La La Land is a film built on winning elements, including writer/director Damien Chazelle's open affection for the musicals of yore (my favorite expression of which is the long takes during the dance numbers which allow you to actually see the performers dancing, rather than cutting up the performance into fast and furious bites), and the performances from Gosling and Stone. While this may be Gosling's second best performance of the year (hard to beat his sublime comedic turn in The Nice Guys), it's still a very good performance that takes what could be just a stock character (the frustrated artist suffering for the virtue of his art) and makes it his own, and Stone brings depth to her performance as an actress waiting for her big break (also a stock character). Though the character is mostly upbeat even as she's struggling, there's a moment late in the film when Mia is reckoning with the idea that her pursuit of an acting career has been a waste of time, where she openly states that maybe it's not just that making it is hard, but that she's just not good enough, that taps into something very real and very moving because dreams are great when you achieve them, but break your heart when you can't. But La La Land isn't here to break your heart (though at times it might seem otherwise); it's here to make you feel good and send you back out into the world with a lighter step and a song or two stuck in your head.
Posted by Norma Desmond at 8:00 AM