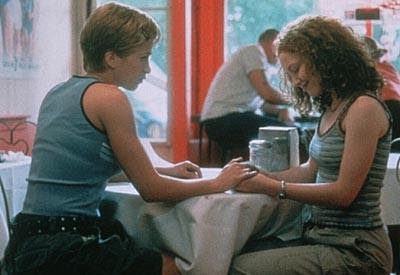 Better Than Chocolate is one of those movies that, for some reason, just always seems to be on TV (at least where I live). I must admit, it is not without its charms. Sure, it relies on a fair amount of cliches to move its story forward, but it's also very funny and, in the end, quite sweet. Basically, it's just nice to see a story that centers on a same-sex couple that doesn't end in tragedy.

Set in Vancouver, the film centers on Maggie (Karyn Dwyer) and Kim (Christina Cox) who meet and swiftly move in together. Sure, it makes sense to a degree since Kim is between residences and living out of her van but, still, that counts as lesbian cliche #1. Maggie and Kim enjoy a brief period free of angst and then are surprised by the sudden arrival of Maggie's mother, Lila (Wendy Crewson) and brother Paul (Kevin Mundy), who are unaware that Maggie is gay. Maggie quickly motherproofs her life, explaining Kim away as her roommate and hiding all the sex toys in her house. This deception puts a strain on Maggie's relationship with Kim, but the two carry on as best they can while being careful not to reveal the truth to Lila, who is so deluded that they probably don't need to be as careful as they are.

The film's subplot involves Maggie's work at a gay bookstore owned by Frances (Anne-Marie MacDonald). The store is in the midst of a censorship crisis (based on the real-life tribulations of Vancouver's Little Sister's store) involving Canada Custom's refusal to allow "obscene" material over the border. This part of the story is a bit more substantive than the romantic plot, though it gets far less screentime. The film does, however, manage to make its point in the time devoted to this part of the story and it does so without becoming too heavy handed. Some of the funniest parts of the film come out of this plot thread, many of them courtesy of MacDonald and her ability to turn a phrase.

There are also other subplots involving Paul's budding relationship with Maggie's bisexual coworker Carla (Marya Delver), whose sexuality Maggie compares to the tornado in The Wizard of Oz "sweeping up everything in [her] path!"; and Lila's friendship with Judy (Peter Outerbridge), a pre-op transexual, though clueless Lila doesn't realize that until Judy literally spells it out for her. Oh, and also, Judy is in love with Frances and struggling to deal with her parents' complete disavowal of her ever since her decision to transition. There's a lot going on storywise with this film.

Written by Peggy Thompson, the film juggles its various plots easily and gives the story a nice sense of balance. The main characters are, of course, Maggie and Kim but by weaving in the subplots of so many other characters, all of them from different walks of life and with different takes on gender and sexuality, the film is allowed to take on a "community" rather than "individual" feeling. Some might dismiss this group characters as a shallow cross-section of a community, but I think that each character brings something unique and valuable to the story. It helps that all of them are so well-played by their respective actors. This is one of those films where the supporting cast ends up being more memorable than the leading players, by which I mean no disrespect to Dwyer and Cox. Maggie and Kim are essentially the straight characters (for lack of a better term) anchoring the story while everyone else spins around them with the force of their various quirks. That's not always a strategy that works, but it does here.

Though Better Than Chocolate touches occassionally on heavy subjects, it is ultimately a light film. It's light in a good way, though, and it's a thoroughly engaging piece of work that I highly recommend if you're in the mood for something less intense.