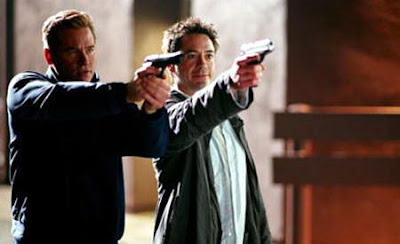 I’d been hearing about Kiss Kiss Bang Bang for years but only just got around to seeing it and now can’t wait to see it again. It’s a funny send up of noir films and conventions, a self-referential Hollywood story, and a buddy movie all rolled into one, with plenty of action and a lot of wit. Plus a bit of gratuitous nudity, if you’re into that sort of thing.

Our protagonist and narrator – though he readily admits that he’s not a very good narrator – is Harry Lockhart (Robert Downey, Jr.), a thief who stumbles into an audition while fleeing the police. He impresses the director and is flown out to Los Angeles for another audition and finds himself drawn to a woman at a party. The woman is Harmony (Michelle Monaghan), a childhood friend who ran away to Hollywood with dreams of becoming an actress. Reunited, he lets her think that he’s a private detective which might have been fine but for the fact that Harmony’s sister shows up in town and promptly dies a gruesome death, which Harmony is certain was murder.

Meanwhile, to prepare Harry for his role the director of the film has arranged for him to shadow an actual detective, known to all as “Gay Perry” (Val Kilmer). While they’re out on the ride-along, they find a dead girl who later turns up in Harry’s hotel bathroom. The two murders are, of course, related and part of a tangled plot involving money, family strife, impersonation, and the long-ago adaptation of a pulp novel beloved by Harmony’s mother.

That novel – and the pulp/noir genre in general – plays a major role in the film, acting as a kind of sign post pointing out the plot’s direction. For example, early in the film Harry tells Perry that the novels always involved two murders, seemingly unrelated, that prove to be firmly linked – I imagine that if he’d known then how closely reality would emulate fiction he’d have paid more attention later when talking about how the novels always involved some form a torture before the hero solved the plot. The film really plays with the conventions of the genre, counterbalancing the harder edges of the story – which does get quite dark and violent – with a protagonist who is unlike the anti-heroes normally found in noir. Harry’s a goofy guy, always getting injured, never having the upper hand – he’s not the Humphrey Bogart or Robert Mitchum type. Perry, on the other hand, displays some of the characteristics of the classic archetype with the difference that he’s gay. In making the character gay the story not only adds another layer to the Harry-Perry relationship, it also plays on the sexual undercurrents present in a lot of classic noir stories.

As friends and antagonists, Downey and Kilmer play off of each other brilliantly. I’m half-way tempted to just make a video of a bunch of their exchanges and let it speak for itself, but I doubt I’d be able to limit myself to just a couple of minutes. I don’t generally hope for sequels, but I really wouldn’t mind seeing them as these two characters again and given how much fun they seem to be having, I’d wager that they wouldn’t mind revisiting these characters either. As the love interest Monaghan manages to keep up and even steal a few scenes herself. I’m not overly familiar with her as an actress but she’s much more alive in this role than she has been in other films I’ve seen her in, which may be a testament to the skills of Shane Black and the energy his direction injects into the story. Major kudos to Black in every respect, as his debut is a smart, subversive, and fun film.

Oh man this is one of my favorite movies! I'm glad you liked it. I'd love to just talk as if I were in this movie, if you know what I mean. Everything they say is just so rapid-fire and funny. Dialogue heaven.

"Look up the 'idiot' in the dictionary, know what you'll find?" "A picture of me?" "No, the definition of the word 'idiot', which you fucking are!"

"She's been fucked more times than she's had a hot meal."

"Yeah I heard about that. It was neck and neck and then she skipped lunch."