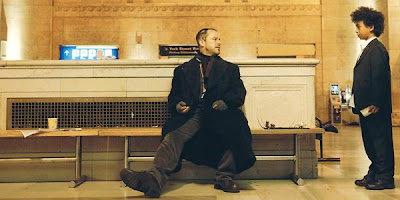 Toronto Stories is a collection of four short films, loosely connected, that aim at giving us a glimpse into the multicultural heart of Canada’s greatest metropolis. Taken as a whole, it’s an endeavour that is at least half successful. Two of the shorts are quite good, too are of lesser quality, though certainly not bad. All in all, a city as large as Toronto probably requires more than four stories in order to really capture its essence and give you a sense of place.

The four stories that make up the film are “Shoelaces,” a coming-of-age story; “The Brazilian,” a non-love story; “Windows,” a darkly comic crime story; and “Lost Boys,” a story about the very fringes of society. Each film runs about 20 minutes and is helmed by a different director, making for four very distinct segments of tone and style. The segments are connected by a loose framing device involving the search for a young immigrant boy who has gone missing in the city, who plays a major role in “Lost Boys,” a minor role in “Shoelaces,” and makes cursory appearances in “The Brazilian” and “Windows.”

Naturally, given that there are so many hands involved, the quality isn’t really consistent from beginning to end. Of the four segments, the only one that completely worked for me was “Windows,” which follows an afternoon in the life of Alton Morris (K.C. Collins), a window washer who used to be a drug dealer. Doug (Joris Jarsky), an old friend and colleague shows up unexpectedly, having broken out of prison to confront his ex-girlfriend, who has just gotten engaged. When Doug takes his ex hostage, Alton finds himself drawn deeper into the situation as he struggles to diffuse it. I would gladly watch a full-length version of this story, particularly if it featured the same actors. Writer/director David Sutherland finds a nice balance between comedy and drama and manages to convey a pretty clear sense of the characters and their relationships in a short period of time.

I would also watch a full length version of “Lost Boys,” which I think has a lot of potential as a story and is easily the segment that best incorporates the missing boy, who is awkwardly shoehorned into some of the segments in order to create a connecting narrative. This segment follows a drug addicted homeless man who encounters the boy and then searches for him after learning that a more nefarious figure has absconded with him. During the course of his search we get a glimpse into his life before the streets, including the wife he left behind and the son whose tragic death continues to haunt him. The protagonist, played by Gil Bellows, isn’t the kind of character you see very often in films and his situation is compelling enough that I think it could sustain a full-length film.

Less successful are “Shoelaces” and “The Brazilian.” The former, though beautifully photographed and featuring a great animated sequence in the middle, fails to fully get itself off the ground. It tries to be about too much in too short an amount of time and so it fails to really resonate. As for “The Brazilian,” it’s the boldest of the four entries but it also feels kind of like a student film. It has an idea but it’s executed in kind of a clunky, unpolished way.

Toronto Stories is ultimately a collection of four very distinct and interesting films that don't always fit together in a cohesive way. Further, the use of the missing boy as a connecting device felt a little contrived for me since some of the shorts incorporated him so easily and others seemed to have more difficulty. In the final analysis, this is a fair if not spectacular effort on the part of the filmmakers.

The segment "Shoelaces" was kind of okay with its simplicity. The second segment, "The Brazilian", didn't really cheer me up since I hardly see the potential of making a non-love story in such a short period. Obviously, this means that I really enjoyed watching the segments "Windows" and "Lost Boys". In fact, while the latter was almost flawless thanks to Gil Bellows' performance, I found "Windows" to be kind of incomplete. Of course, Sutherland, as you pointed it out, "manages to convey a pretty clear sense of the characters and their relationships in a short period of time". However, when I watched the segment, I was asking myself two questions:

1. How could the character played by Carly Pope, who comes from a wealthy family, be in love (in the past) with someone who turns out to be a crook?

2. If that character was not a crook in the first place, how did he get himself in a downward spiral (something that we should have been introduced to in the dialogues of the beginning between the black guy and him)?

Even though the first two segments are not as good as the two last ones, this still a good movie to watch, though. Nice review, by the way!