Countdown To Oscar: The Lives of Others 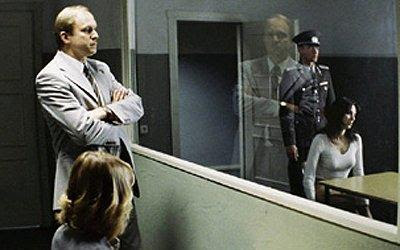 If you wanted to simplify it to its most basic elements, I suppose you could say that The Lives of Others is about a good man who realizes that he’s a cog in a bad machine. His redemption, if you can call it that, is not simple: it’s messy for everyone involved – but at least he saves his soul. Though I’m still not convinced that it should have won the Foreign Language Oscar over Pan’s Labyrinth, I liked The Lives of Others a lot. To be honest, since seeing it, I haven’t been able to stop thinking about it.

The story is set in East Berlin during the final years of the Communist regime (not that anyone knows, of course, that the end is so near). Wiesler (Ulrich Muhe) is a Stasi agent who trains new recruits in the techniques of interrogation and seems, in these moments, to be what you would expect of a Stasi agent: a cold blank slate with no ideals of his own and a robotic loyalty to the State. When the opportunity arises to handle surveillance of the playwright Georg Dreyman (Sebastian Koch), Wiesler takes it, reasoning that Georg might be to good to be true in terms of his commitment to the ideals of the regime.

Wiesler and his team enter Georg’s apartment and proceed with cool efficiency to bug the rooms and set up a centre of operations in the empty attic of the building. When a neighbor has the misfortune of catching a glimpse of what’s going on across the hall, Wielser makes it clear to her that she has much to lose by tipping off Georg, and it’s obvious that intimidation is second nature to him. What makes this film work so well is that Wielser begins the film as a villain, totally detached from emotion and empathy, and gradually becomes the hero as he comes to care about Georg through his surveillance.

Georg lives with his girlfriend, Christa (Martina Gedeck), an actress of some acclaim who has little belief in her talent and a secret addiction to pills. She has also drawn the attention of a government minister who coerces her into sex by threatening to keep her off the stage forever and, worse, to have her arrested for illegally procuring pills. This is, of course, the real reason for the surveillance of Georg, so that the romantic rival can be removed and a more definitive move can be made on Christa. Knowing this plays a large role in changing Wiesler, who sees it as an abuse of power and begins to realize that the whole system is, in fact, an abuse of power.

Following the suicide of a friend, Georg decides to take action, writing an article about the cover-up of the suicide rate in East Germany that will be smuggled across the border and published in the West. His friends advise him to keep it a secret from Christa, whom they fear may be unreliable, but she accidentally discovers where he’s hiding his pages and the typewriter he’s been given to write the essay (the Stasi have experts who can discover from the type-face what typewriter was used and who it belongs to). What happens after this requires intervention from Wiesler, whose manipulation of the situation will ultimately save one life, end another, and ruin his career.

The story is sturdily constructed and director Florian Henckel von Donnersmarck does an excellent job building up the tension as the characters work their way towards inevitable tragedy. I really only have one criticism of the film, which is that the end is a little overloaded with scenes beginning with the title “X Years Later.” It makes the ending seem a bit choppy, though the final shot, when Wiesler knows that his sacrifice was not in vain, makes it easy to forgive.

I wish they could have tied this with Pan's Labyrinth, they were both so good!

I know exactly what you mean about how it sticks with you. It's one of the most impressive directorial debuts I've ever seen.

Oh wow, I didn't even realize that this was a debut. It's an even more impressive achievement knowing that.

Who knows where to download XRumer 5.0 Palladium?
Help, please. All recommend this program to effectively advertise on the Internet, this is the best program!