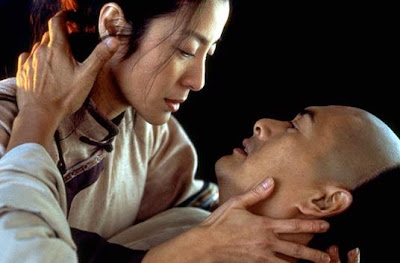 I hadn’t seen Crouching Tiger, Hidden Dragon since its theatrical release nearly a decade ago and I’d forgotten how beautifully photographed it is. The color pallet captured by cinematographer Peter Pau is so vibrant and alive that it elevates the film to a whole other level - and that's just one of the extraordinary elements of the film. From top to bottom, this is a masterful piece of craftsmanship; a true work of art.

It’s all about the green sword of destiny – or, at least, it’s ostensibly all about the green sword of destiny. The sword belongs to Li Mu Bai (Chow Yun Fat) who has decided to give it to Sir Te (Sihung Lung) and give up his warrior ways. The sword will be delivered to Sir Te by Yu Shu Lien (Michelle Yeoh), Li’s friend with whom he has long been in love, though they have never spoken of it out of respect for her deceased fiancée, who was Li’s friend. She delivers the sword and is promptly stolen by Jen Yu (Zhang Ziyi), who has secretly been working with Jade Fox (Pei-pei Cheng), the woman who killed Li’s master.

Female characters – both “good” and “bad” – are prominent in the story and their concerns are at the forefront. Jen is on the verge of being married off by her parents and confesses to Shu Lien that she envies the freedom she has as a warrior, only to be informed that that life isn’t as free as she might think. In a flashback we learn why Jen is so reluctant to marry: her love for the bandit Lo, also known as Dark Cloud (Chen Chang). Lo and his gang ambush Jen’s caravan and when he steals her comb, she jumps onto a horse and chases after him. They fight all over the desert and fall in love, but she returns home after they spot a search party her father has sent after her. After she steals the sword, Lo comes to find her and tries in vain to stop her from going through with her marriage. The story itself is deeply concerned with the choices available to women and the long-term effects of those choices, which I think is part of the reason why the film stands out so much – it isn’t simply a martial arts showcase, it’s also social commentary.

Jen goes through with the wedding, but the following day she flees and finds herself at a crossroads. She has several options: return to her husband and continue her aristocratic life, run off with Lo and live as a bandit, return to Jade Fox and live as an outlaw, or go to Li and become his apprentice. As she’s in the process of deciding her fate, her path crosses with that of several warriors, whom she beats during a long fight scene in a restaurant that is barely standing by the time she’s finished. All of the fight sequences in the film are outstanding, but this is one of the standouts, along with the tree top fight between Jen and Li, and the rooftop chase/fight between Jen and Shu Lien at the beginning of the film.

I’ve already mentioned the fantastic cinematography, but I’d also like to mention the score by Tan Dun, which so perfectly complements the action on screen. The film won Oscars for the cinematography and the score, as well as collecting the prize for art direction and foreign language film. The film was also nominated for best picture which, in hindsight, it really should have won (it lost to Gladiator of all films). There is a timelessness to this film that ensures that it will always have a place in the pantheon of great cinema, which I suppose is better than any actual award could ever be.

I love that film ever since I saw it in Grade 7. I just can't believe that many people hated this film because of the fight scenes' unrealism. I didn't give a business about that for at that time, I was so happy to see a martial arts film that could finally be taken seriously.

Moreover, although the ending was a little bit sad, I liked the idea that it conveyed about Tia Long's (Zhang Ziyi) remorse for breaking the life of some people she came across (Li Mu-Bai, Shu Lien and to a lesser extent her family). All in all, it's just too sad that the novel, which the film was adapted from, is not available in either English or French here in Canada.

A lovely, lovely film, and a fine piece.