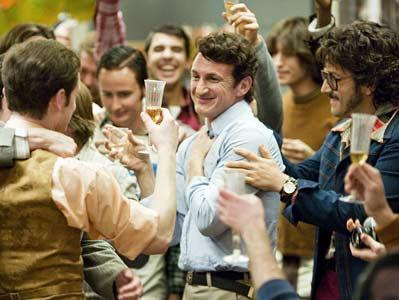 As wonderful as Gus Van Sant’s film is, it’s sad to think that its subject is still so very relevant. Harvey Milk was assassinated 30 years ago, but gay rights remains a battleground issue and ignorance and hatemongering are still tools powerful enough to disenfranchise an entire segment of the population in a society founded on the principal of equality. Though Milk’s untimely end was tragic, the film itself is triumphant, a celebration of the power that people have to make a difference. With its message of hope and unity, Milk is the right movie at the right time.

The film begins with Milk (Sean Penn) dictating a message in the event of his assassination. Throughout the story Van Sant will cut back to this scene, using it to tie the segments of the film together. In the story proper we first meet Milk in New York, where he celebrates his 40th birthday by picking up Scott Smith (James Franco) in the subway. Together Milk and Smith move to San Francisco, where they live a hippie lifestyle and open a camera store. Faced with the threat of discrimination from other shop owners in addition to the police and local government, Milk takes his first steps into the realm of activism, first organizing the gay community to boycott shops that aren’t gay friendly and later rallying the community to support striking teamsters, who would in turn agree to hire more gay drivers.

Milk runs for office on a number of occasions and comes a little bit closer to victory with every campaign. His political life, however, takes a heavy toll on his personal life, and his relationship with Smith becomes a casualty of his ambition. Since Smith was one of the driving forces behind the earlier campaigns, a replacement must be found and Milk shocks his crew by choosing Anne Kronenberg (Alison Pill). The scene is brief, but it does something important: it acknowledges the rift between men and women within the gay community (“My girlfriends say you guys don’t like women. Just asking, is there a place for us in all this, or are you scared of girls?” Kronenberg asks) and emphasizes Milk’s desire to unite and speak not just for gay men, but for all people who aren’t represented in government. This time Milk wins, gaining a seat on the Board of Supervisors. Also elected to the board is Dan White (Josh Brolin), who at first appears to be a potential ally but grows increasingly hostile to Milk, whose political star shines while White’s quickly fizzles out.

The relationship between Milk and White is complicated, to say the least. Even as he’s trying to form a political alliance with Milk, White tries to make it clear that he’s a “family values” kind of guy - though Milk thinks that perhaps he doth protest too much. The defining factor, though, seems to be less homophobia than simple jealousy. Milk gets things done, accomplishing things which make his constituents happy and elevating him to heroic status, while White finds himself in the political wilderness, without allies and entirely ineffective. Brolin is excellent as he shows White’s growing desperation; it’s a subtle performance in which many things are suggested rather than spelled out. However, much like White exists in Milk's shadow, Brolin's performance is dwarfed by the stellar turn by Penn. Penn is someone I think of as a capital “A” actor, someone whose off-screen persona suggests a high level of seriousness and intensity, a dourness that often carries over to their characters. Here, however, Penn renders a performance that is absolutely joyful. When was the last time you could say that? I have to think back to 1999’s Sweet and Lowdown to even come close to the kind of elation which he radiates in this film. Penn doesn’t simply make you empathize with Milk, he makes you understand why others look to and follow him.

A lot of biopics fall into the trap of relating the story in the manner of a laundry list of events that must be touched on, and while Milk isn’t entirely able to sidestep this element, it does manage to keep the story moving without halting over a series of “this happened and then this happened” moments. Van Sant knows the story that he wants to tell and he relates it smoothly, intercutting between dramatization and news and documentary footage, and managing to avoid becoming soggily sentimental about his subject. The Milk presented here is heroic, yes, but not perfect and not without his flaws, and the film is unafraid to point those flaws out, usually through Smith who remains an important part of Milk's life even after they've broken up.

In light of all the anti-gay legislation which passed in the United States in November, it’s hard to watch the section of the film which deals with the defeat of Proposition 6 without it feeling a little bittersweet. At the same time, however, I do feel encouraged that things are changing for the better. I remember when I saw Brokeback Mountain and there were groans of distaste at even the slightest moment of intimacy between the two men. I saw this film – which is a little more explicit than Brokeback - in a full theatre and nothing of the kind happened. In fact, the only time the audience expressed distate was every time Anita Bryant openned her hateful mouth. It’s a small thing, but progress is progress.