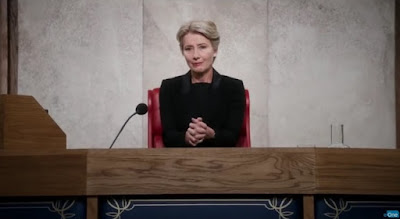 The Children Act, based on the novel of the same name by Ian McEwan (who takes on screenwriting duties here), is a rare breed of modern film. Unlike so many films released now, which are designed to appeal to as broad an audience as possible because transcending the boundaries of demographics is the only way to recoup increasingly astronomical production costs, The Children Act squares in on a specific audience and is content to cater to it alone. It's a movie for adults, a drama about morality that centers on a woman in a position of power who comes to doubt the way that she has used that power. It's headlined by Emma Thompson, whose performance is reliably profound and raises the film up even in its weakest sections.

Thompson plays Fiona Maye, a judge in the High Court of Justice whose cases tend to be high profile and high in emotion. As the film opens she's to decide to fate of conjoined twins who will die if they aren't separated. Separating them will result in the certain death of one but will provide the other a chance of survival. The parents don't want the surgery, believing that if the children die it is God's will. The doctors want to perform the surgery and save one of their patients. Fiona sides with the doctors and is branded a "murderer" by the parents' lawyer then has to sneak out the back of the courthouse to avoid the press and, possibly, protesters. Hers is a demanding, emotionally draining job and her home provides little escape as her husband, Jack (Stanley Tucci), frustrated by how unavailable she is and how checked out of the marriage she seems, announces that he's going to have an affair with a colleague half his age.

The weakness in the film is, largely, in how it depicts the marriage between Fiona and Jack. His initial point, that their marriage has become sexless and that they never spend any time together, leaving him in a state of loneliness and frustration, is fair. It's literally everything that happens between them afterwards that makes you want to see Jack get punched in the face just once. He tells her that he's going to have an affair but that their marriage will carry on as usual. It's not a negotiation, it's an edict. When she tells him that their marriage is over if he has the affair, he tells her that she's being ridiculous. He then packs a bag and goes off to be with the other woman, disappearing for a few days without any communication with Fiona, and then he comes back as if nothing has happened, is surprised when she tells him he'll be sleeping in the guest room, and is angry when he finds out that she's consulted a divorce lawyer and tells her that he hopes the lawyer told her she was overreacting. Jack can go pound sand but instead of acknowledging that and, in particular, instead of suggesting that perhaps the reason Fiona won't talk to him about how she's feeling is because he keeps telling her that her feelings are wrong, the film aligns itself with Jack and winds its way towards Fiona having a moment of "clarity" that will allow her to come back into the marriage. It's not that their reconciliation is a bad thing, per se, or even that Jack's original complaint, that Fiona doesn't make any time for their relationship, isn't legitimate; it's that the film frames their marital difficulties as if the only problem is that Fiona is being unreasonable even as it shows Jack acting like a total dick who isn't interested in resolving their issues so much he's determined to get his own way.

As her marriage is coming apart, Fiona hears the case of a teenager with leukemia who is refusing a blood transfusion because it goes against his beliefs as a Jehovah's Witness. The hospital has asked for a court order allowing them to provide the transfusion, while the boy's parents (Ben Chaplin and Eileen Walsh) ask the court to make an order that their son can refuse treatment, reasoning that he's only a few months away turning 18 and having the legal right to make that decision for himself. In an unusual move, Fiona announces that she's going to go to the hospital and talk to the boy, Adam (Fionn Whitehead), in order to determine whether he truly understands the decision he wants to make. When she arrives, Adam is amazed that she would come to speak to him and is enthralled when she teaches him the lyrics to a song he's learned how to play on the guitar. He asks her to stay and keep talking to him, but she has to return to court to render her verdict. She ends up siding with the hospital and afterwards, his life having been saved by the blood transfusion, Adam begins popping into her life with regularity. He gets hold of her cell phone number and leaves a series of messages for her, he shows up at the courthouse to try to talk to her, and he follows her when she goes out of town to sit in other jurisdictions as part of the circuit court. The experience of having been prepared to die for his religious beliefs only to have the court intervene to prevent his death has caused him to have a crisis of faith. Now he wants Fiona to fill the void that's been left.

The relationship between Fiona and Adam is more complex and more compelling than her relationship with Jack is ever allowed to be. Fiona's motivations are never really spelled out for clarity. Ostensibly she goes to visit Adam at the hospital because she's going to give him a chance to prove to her that he has a clear and complete understanding of what it means for him to refuse treatment, but as he will later point out after he does a bit of investigating, she couldn't really have been on the fence about how she was going to rule because the court has always sided with hospitals in similar cases. So what was she really trying to get out of seeing Adam? Was it to obtain a moment of human connection that she feels has been lacking? Whatever the reason, the experience has a profound effect on Adam that she refuses to take responsibility for. On the one hand, she's technically correct in her attempts to not have contact with Adam because it would be entirely inappropriate in the circumstances for her to become his friend or to accede to the request he makes later to be allowed to move in with her and Jack, since his loss of faith has created conflict in his relationship with his own parents. On the other hand, this situation with Adam is one of her own making, borne not of necessity but of a decision that she makes for reasons that seem more personal than professional.

For Fiona, the meeting between her and Adam was just a moment in time, something that happened and which should then have become a footnote in her history, but for Adam the meeting is literally life changing. When his case goes to court, he insists that he's fully prepared to die. After he receives the blood transfusion his perspective on his religious beliefs changes and he begins to dismiss the episode as a matter of teenage melodrama, of him having become caught up in this image of himself as some kind of holy martyr. He also begins to turn away from his parents, questioning why they were so prepared to allow him to die. The wedge driven between him and his parents sends him seeking validation from Fiona and after she repeatedly rejects him, his perspective is changed once again. Now instead of seeing Fiona as the person who saved his life and convinced him that there are things worth living for, he sees the situation as his own The Last Temptation of Christ, with himself as Christ and her as the Devil trying to tempt him away from his destiny at the moment he's meant to fulfill it.

There's a great deal of emotional and intellectual intricacy in the relationship between Fiona and Adam and Thompson and Whitehead dig deep, exploring this unusual relationship with subtlety and grace. Although the film has certain flaws, it is ultimately an extremely well-acted and often thought provoking drama with merits that far outweigh its imperfections.
Posted by Norma Desmond at 8:00 AM