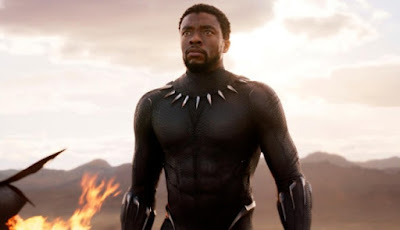 Long live the King. To watch Black Panther is to be awed, not just by the film itself (though it is a work of incredible achievement) but by the tradition that it joins. As the opening credits unfold, highlighting the characters and films of the Marvel cinematic universe, it's hard to be unimpressed by what Marvel has accomplished, the way that it has brought together so many moving pieces, creating properties that are unique from each other but also complement and build off of each other as part of one large, unified tapestry. That this is not as easy as Marvel (barring a misstep in the form of The Incredible Hulk) has made it look is evident in the struggles of other would-be cinematic universes, from the struggling DC's superhero series to Universal's dead on arrival "Dark" universe. Eventually the series will start to be hit by the reality that you can only go so high before you start to come down, but that sure as hell doesn't happen with Black Panther, which joins Guardians of the Galaxy, Ant-Man, Doctor Strange and Thor: Ragnarok as movies that probably could not have been made 10 years ago (or, at least, not with the budgets and hype that they got) and continues Marvel's streak of just getting better and better.

Black Panther picks up in the wake of the events of Captain America: Civil War, which saw the death of King T'Chaka (John Kani) and the ascension of his son, T'Challa (Chadwick Boseman), to the throne of Wakanda, a nation that the rest of the world believes to be undeveloped and poverty stricken, but which is in reality a wonderland of advanced technology thanks to its access to a metal called vibranium. In 1992 some vibranium is sold by T'Chaka's brother, N'Jobu (Sterling K. Brown), to arms dealer Ulysses Klaue (Andy Serkis), who continues to pursue the acquisition of the metal in the decades that ensue, finally teaming up with Erik Stevens (Michael B. Jordan), nicknamed "Killmonger" during his time as a black ops soldier. Unbeknownst to Klaue, Killmonger, the secret son of N'Jobu, has greater ambitions than simply getting hold of vibranium and making weapons from it: he intends to challenge T'Challa for the Wakandan throne.

Although Black Panther's success as a film can't be reduced to any one thing - it's got a lot going for it - it helps immensely that it has such a strong screenplay (written by Joe Robert Cole and director Ryan Coogler) to act as a foundation on which to build its other elements. Rather than looking outward and making its stakes nothing less than the fate of the world (though, of course, if Killmonger is to succeed in his plot it would ultimately have an repercussions for the entire world), Black Panther looks inward and locates its stakes almost exclusively in Wakanda, all the better for both world building and adding dimension to the central conflict. There's something almost Shakespearean about Killmonger as a character and the dynamic between himself and T'Challa that makes him one of the most compelling villains to wreck havoc in the Marvel universe. He is driven not just by the desire for world domination (although there is an element of that) but by a desire to claim the birthright that he has been denied due to the falling out between T'Chaka and N'Jobu and to use the technology that Wakanda has to finally give the upper hand to people who have historically been subjugated.

What makes Black Panther so compelling is that even though Killmonger is the villain, he's not entirely wrong in his motives. Wakanda is basically Atlas Shrugged's hidden valley of missing billionaires, except that instead of being driven to hide because of poorer people demanding more from them, Wakanda hides because revealing what it has to the rest of the world would be to invite other nations to try to take it (and given the history of colonialist exploitation and abuse of the African continent, that's not an unfounded fear). But, as Killmonger and his father before him point out, the resources and technology available in Wakanda could also help people who are oppressed to fight back, raise themselves out of poverty, and generally make their lives easier and better (though Killmonger does want to take things further than simply making the world a more equitable place and instead flip the balance of power so that the oppressed become the oppressors). The conflict in the story, then, is a real conflict between two ideologies that have similar goals but differ in the way they want to achieve those goals, with one strategy being essentially a defensive one and the other being an offensive one. What deepens the conflict is that T'Challa has been raised to believe in one way of doing things, but is ultimately torn by the fact that there is truth in the other. He can do more for a greater number of people by sharing the technology of Wakanda and his struggle to find a way to reconcile that to the traditions and politics of the nation he's going to lead is what makes his story more than just a standard hero's journey in which he must fall in order to rise again.

In addition to having such a solid narrative foundation with such a well-realized hero and villain, Black Panther also succeeds on the strength of its supporting cast and characters. The relationships and interpersonal conflicts that arise feel character-driven rather than plot-driven - a wedge is driven between T'Challa and his friend W'Kabi (Daniel Kaluuya) by the former's inability to capture Klaue, who killed the latter's parents; the challenge in T'Challa's relationship with his former girlfriend, Nakia (Lupita Nyong'o) is her feeling that being a consort will stand in the way of her own career; Okoye (Danai Gurira) becomes torn between the allegiance she has sworn to protect whomever sits on the Wakandan throne and her personal feeling of loyalty towards T'Challa; M'Baku (Winston Duke) leads the renegade mountain tribe and starts out as T'Challa's rival, but becomes an ally because he has a moral code that he follows regardless of his personal feelings - and the characters themselves, including T'Challa's mother, Ramonda (Angela Bassett), and his sister Shuri (Letitia Wright), who is integral to T'Challa's success as the Black Panther by designing and developing the gadgets and technology that help make his superheroics possible, are well-rounded and interesting.

Black Panther is a really good movie, but I expect that by now pretty much everyone knows that. In just 5 weeks it has amassed over $600 million at the domestic box office and at this point may only be unseated as the #1 box office movie of the year by Avengers: Infinity War. It's being celebrated by many as the best superhero movie of all time, and when next year's Oscars roll around it ought to be on voters minds in the costume and production design categories at the very least. It's a credit to Marvel that 10 years on and 18 movies deep it can still make its products feel like "events." Black Panther is an event you don't want to miss.
Posted by Norma Desmond at 5:53 PM

Great review. This film is an example of creating a film that is willing to reach a wide audience and do it without the need to dumb things down. The fact that the film has managed to do so well and create such a positive influence that athletes are doing the Wakandan salute, people embracing their roots, and children finally having heroes (though fictional) that they can be in awe of. I was happy to see the film last month and elated that it's a success and spreading all kinds of positivity to the world.

It's the kind of movie that makes you want to shout, "That's how it's done!" It just gets things so right.