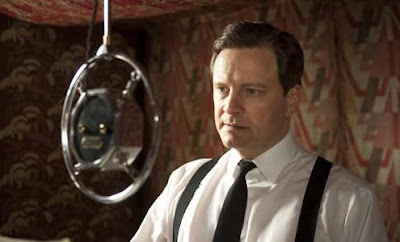 The story of a man who has difficulty engaging with people and the technology that allows him to connect with those from whom he might otherwise be alienated. No, I’m not talking about The Social Network, but about The King’s Speech, the latest in a long line of films about British royalty. Directed by Tom Hooper and written by David Seidler, it manages to combine the best elements of stories about monarchs – men and women born on top of the world – and the best elements of stories about underdogs. It’s a fairly conventional film in many respects, but it’s so emotionally engaging that that hardly matters.

The film begins in 1925, when the man who will eventually become King George VI (Colin Firth) attempts to deliver a speech which quickly becomes marred by his stuttering. The experience leaves him feeling humiliated and he's so frustrated by the failure of various attempts at fixing the impediment that he's all but given up hope. It's his wife, Elizabeth (Helena Bonham Carter in a solid, understated and refreshingly unquirky performance), who decides to make one last ditch effort, engaging the services of Lionel Logue (Geoffrey Rush), an Australian speech therapist with unconventional methods.

At first the patient is hostile to the treatment, bristling at the familiarity with which Logue addresses him - calling him "Bertie" - and rejecting the suggestion that his problem is in any way psychological and rooted in some trauma from childhood that ought to be dealt with. Slowly, however, he begins to trust Logue and as a result starts to see some progress regarding his speech - and not a moment too soon, as a series of crises thrusts him into the spotlight and transforms public speaking from a ceremonial obligation to a political necessity. His father dies, his brother abdicates, and war is declared with Hitler's Germany; silence is no longer a viable option.

The key to the success of The King's Speech rests in its ability to take a figure who should be remote to most of us and most of our experiences (after all, who but a King knows what it's like to be a King?) and make him relateable. This isn't to say that he's made out to be just a regular guy - he's always quick to enforce the class distinctions which set him apart and takes formal protocol very seriously - but that his struggles are presented in such a way that we can understand them, that they feel personal rather than general. We want him to succeed because the film manages to form a connection between him and us, because it makes us so invested in his struggle. The big climax of the story admittedly plays a few familiar notes (the moment when it looks like the protagonist may falter, the montage of people in his audience, the moment when he rallies, and the moment when he is flush with triumph) but it plays them masterfully. The finale is moving, sending the film out on the strongest possible note.

But the skill that's gone into the construction of the story is only half the battle; the other half is the performances. Firth delivers perhaps his finest performance to date (though a strong argument could be made for his performance in last year's A Single Man), playing a man of fierce pride and incredible self-doubt. He is not always a nice person, particularly in his dealings with Logue, but Firth (with help, of course, from Hooper and Seidler) is able to contextualize his behavior so well that we don't necessarily hold it against him. Rush more than holds his own as Logue, a man of great endurance and persistence who quietly accepts that many people in British society will never take him as seriously as they should because he's Australian (as a side note, I think it's hilarious that a film that comes back to that theme time and again also cast the English-born but Australian-raised Guy Pearce as Edward VIII). Though their stations are very different, there are some parallels between Logue and the King so that the success around which the finale is built is ultimately a double victory because it's a triumph for both men.

The King's Speech is easily one of my favourite films from 2010. There's really nothing about it that I felt didn't work; it pretty thoroughly accomplishes what it sets out to do and pulls it off with grace. I can't recommend it more highly.

What Others Are Saying:
The Dark of the Matinee
Bitchin Film Reviews
The World According To Ness

A well crafted piece of entertainment built around a couple of flashy but engaging performances from Firth and Geoffrey Rush.