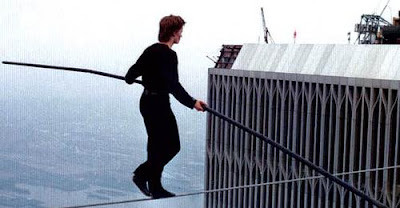 James Marsh’s Man On Wire is about a man with a dream. It’s as simple as that. His dream – to walk a tightrope between the World Trade Center towers – might not be comprehensible to everyone, but it’s difficult not to admire his dedication to making it a reality and more difficult still not to be in awe of the fact that he is the only person who will ever do what he did, who will ever see the world from that particular vantage point. His scheme is audacious and so too is the movie.

Part of what makes Man On Wire so completely engrossing is that it unfolds like a first-rate heist movie: a man has a scheme he wants to pulls off, he puts together a team to accomplish it, they go through various stages of planning, and then they do it – they pull off the “artistic crime of the century.” The story is related through interviews, actual footage, and reconstructions using actors, this last element playing up the caper aspect and giving the film a marvellous sense of whimsy.

Now, about the man who makes it all happen. He is Philippe Petit, a French high-wire artist whose charisma and enthusiasm make it easy to understand how he was able to talk people into helping him accomplish his grand, crazy dream. He tells us that as a child he was always climbing, that he had a compulsion to go higher and higher and how it seemed only natural for him to become a tightrope walker. He describes his feelings upon learning about the WTC and knowing that he just had to put a wire between the towers and walk it. You get the sense that he feels as though it’s what he was put on earth to do; to suspend himself in the air between two of the world’s tallest buildings.

The plan comes to fruition in 1974, when Phillipe and three other men are able to sneak to the top of the two towers (amazingly, not only are they able to sneak themselves up, but they’re able to sneak up all their equipment as well). Prior to the big day they had made several trips to the towers, mapping out the spots where the wires would be anchored and, even more importantly, how the guy-wires would be placed. The plan for getting the wire from one tower to another is about as crazy and genius as the goal itself and if you don’t know how they did it, I don’t want to spoil it for you here. Needless to say, though, there is a pretty large margin of error when it comes to whether the wire actually will get from one tower to the other, and for whether Petit will in fact make it out there without getting caught. The set-up areas are both monitored by guards and Petit describes himself and one of his cohorts dragging a cable up to the roof right under the nose of a guard (whom Petit swears looked right at him). That they somehow managed to avoid being apprehended just adds to the sense that it was all meant to be, that the towers were built for Phillipe to walk between them, that Phillipe was built to walk between the towers.

Phillipe manages to stay on the wire for about 45 minutes and cross back and forth eight times before being coaxed off by the threat of a police helicopter swooping down to pluck him off (which sounds like a recipe for disaster to me, but luckily it didn’t come to that). Phillipe is arrested but, ultimately, the consequences of his adventure are minimal and he’s even issued a lifetime pass to the observation deck of the towers. The elephant in the room is, of course, the fate of the towers, which the film never mentions (not that it has to). It’s the right decision – this is a story of triumph and imagination and it’s light, happy ending is completely deserved.