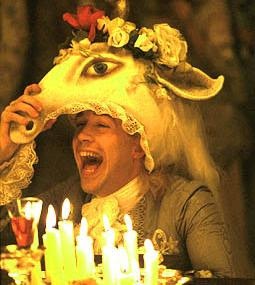 Whenever someone complains about a film being historically inaccurate, I can’t help but think of Amadeus. Amadeus is not a film that presents the literal and factual story of Wolfgang Amadeus Mozart, but it is nevertheless a great and entertaining film. Does it suffer for its inaccuracies? Not a bit. In fact, the liberties that the film takes only make it stronger.

One of the reasons that Amadeus works so well is perhaps that it’s less a biopic than a story of two artists, one disciplined but of moderate talent, and another who seems to have been given a gift by God, but who wastes it through his wonton ways. This is a story that could be made about any two artists, creating in any artistic medium, at any time in history. This film just happens to be about Mozart (Tom Hulce) and Antonio Salieri (F. Murray Abraham), the man who (according to the film) kills Mozart, but only succeeds in destroying himself.

The story is presented largely from Salieri’s point of view. We meet him as a reasonably popular and passably talented composer and regular at the court of the Emperor Joseph II (Jeffrey Jones). He’s thrilled by the music of Mozart but appalled by Mozart’s behaviour. Salieri, who must suffer to produce something that he knows to be of average quality, sees Mozart produce beauty at the drop of a hat, with seemingly no effort, in between binges of drinking and partying and sex. Salieri’s jealousy of Mozart’s ability consumes him and he sets out to destroy him. However, even when audiences turn away from Mozart, and even after Mozart is dead, Salieri still cannot find peace. It doesn’t matter that Mozart has fallen out of favour; Salieri, as a first class connoisseur (if not a first class creator) of music, knows how brilliant Mozart is, even if other people won’t acknowledge it, and he knows how average he himself is, even if the people decide, for a moment, to favour him. It isn’t the fame that Salieri wants, it’s the ability, and this is made apparent by his assertion that God is mocking him through Mozart’s talent.

The scenes of Mozart’s death are the best in the film, playing at different levels. On one hand, Salieri is “winning” because Mozart is dying. On the other hand, Salieri loses because Mozart’s Requiem, which he has dictated to Salieri while dying and which Salieri had planned to pass off as his own, has been confiscated by Mozart’s wife (Elizabeth Berridge). Salieri wants Mozart to die because Mozart’s life and art are like a curse to him. But, as Mozart dictates to Salieri, as Salieri works in the presence of genius, there is also part of him that wants Mozart to live and continue creating the work that only he is able to produce. At some level, Salieri knows even before the deed is done that his rival’s death will solve nothing for him, but once the course is set, it must be followed through to its end.

There is a lot of darkness and pathos in Amadeus, but there is a great deal of joy as well. As a matter of fact, for a story about one composer who slowly goes mad and another who drives himself to an early and tragic death, this film is a lot of fun. The Mozart who is presented to us is like a modern day rock star who gains fame too easily at too young an age, overindulges in all manner of vice, and burns himself out – but, boy, does he have a good time doing it. Further adding to the rock star image is the punk aesthetic at play in the way Mozart is costumed, most notably in his wigs which are a shade of pink in contrast to the white wigs worn by everyone else. The impression that the film leaves you with is that Mozart was a fun guy who valued a good time over everything else and just didn’t know when to say when, and Hulce plays this aspect of the character for everything that it’s worth. There are more serious moments as well – when he’s dying, when he’s defending his music against critics – but for the most part, Mozart is at the center of all good times, of all laughter, of all ecstasy. Meanwhile, Salieri broods in the corner.

Abraham is pitch perfect as Salieri – alternately smug, envious, vengeful, sorrowful and, finally, mad. The film features one of the best endings in cinema, with Salieri in an insane asylum, being wheeled along a corridor while telling the other patients, “Mediocrities, I absolve you… I absolve you… I absolve you all.” At the end Salieri is free, having absolved himself not for killing Mozart, but for failing to be Mozart. The only downside is that he had to go mad before he was able to do it.

Posted by Norma Desmond at 5:45 PM

This is in my Top Five favorite movies of all time for many of the reasons you describe.

Have you see the Director's Cut, with over 20 minutes of film restored? It's interesting - the scenes that were added back actually show much more explicitly how Mozart fell out of favor with Viennese society and into poverty. And they also explain why his wife had such antipathy against Salieri. (It never really made sense to me why she was so angry to find Salieri with her husband near the end of the movie; the restored scenes show what that anger was based on.)

I haven't seen the Director's Cut, but I've heard about it and it's definitely on my list of movies to seek out (a list which seems to be ever growing).