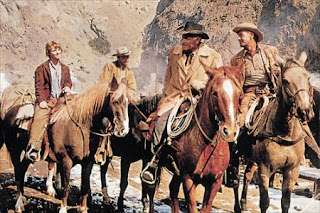 Ride The High Country, like many Westerns to come out during the 1960s, is about the transition of the West from “wild” to “civilized,” and the men who get lost along the way. Steve (Joel McCrea) and Gil (Randolph Scott) are two former lawmen who know that they’re past their prime but want one last adventure before it’s too late. There is a kind of desperation that surrounds them – this is their last chance and it has to matter. They bring along a young upstart named Heck (Ron Starr), who thinks he’s going to show them a thing or two, and Elsa (Mariette Hartley), a rancher’s daughter who is running away to get married.

Age plays a big role in this film. Steve and Gil are aware that they aren’t the men they used to be, that their bodies aren’t up to life on the trail and that this will be their last hurrah. They talk a lot about the old days and the new aches and pains in their bodies, about the things they just can't do anymore. Steve wants to make the most of this job and go out knowing that he was as good as when he came in, but Gil has other plans. He and Heck are plotting to steal the gold that they’ve been hired to transport, and maybe kill Steve if he gets in the way. Gil feels guilty about betraying his friend, but sees this as the only way for him to gain financial security for the days when he can’t ride out anymore. Steve, when he foils the heist, isn’t having any of that and can’t be talked into sharing the loot or letting Gil and Heck go free. Pretty soon he’s transporting the gold, two prisoners and a runaway bride through the dangerous territory while being pursued by an angry husband and his brothers.

True to its genre, it ends with a shoot-out. Steve, Gil and Heck, now reconciled and back on the same side, are running out of bullets and getting ready to face off against the Hammond brothers. The remaining Hammonds are holed up inside Elsa’s farmhouse and agree to come out and face the other men for a proper showdown, but one wants instead to wait for them to stand from their cover and ambush them. His brother shakes his head. “Ain’t you got no sense of family honour?” he asks. It isn’t just the unspoiled nature of the West that Peckinpah is lamenting, but also the change in the character of the men who live there. It’s no longer the place for brave, honest men (idealized though that image may be), but instead it’s for the cowards and the cheaters and the conmen. In the end, the Hammonds are killed, but so is Steve. Gil promises Steve that he’ll see their job through, and Steve takes a last look at the mountains in the distance before dying and taking the West with him. Steve is the ideal man for Peckinpah’s ideal West and neither can survive without the other. It’s the Gils and the Hecks of the world, men who are basically good but can talk themselves into being bad, that will see the West through its transition.

Though the film is ostensibly about “manly” men, simpler times and supposedly nobler values, it is also, strangely, almost feminist in its treatment of women (or, rather, the woman). Elsa is shown to be a smart and capable woman, and the film rejects the idea that her father should be allowed to dictate her love life (he’s your basic cardboard cut-out religious fanatic and there’s some suggestion that his feelings for his daughter aren’t completely… fatherly), and the idea that a wife is the property of her husband and relinquishes her rights once she’s married. The only reason I say “almost” is because Elsa is continually putting herself in situations with potential for danger (usually of a sexual nature) and leaving it up to one or other of the men to come along and rescue her.

Ride The High Country is many things at once. It’s an action movie, a buddy film, a drama, and a comedy. But above all, it is a eulogy for an idealized way of life, for the image of the Old West and the men who helped to shape it.

Posted by Norma Desmond at 5:45 PM

Somebody once said that every Western has one of only three themes; I forget the others, but one is the fading away of the "old ways" in favor of the new (inferior) ones. As you point out at the end of your fine review, Ride the High Country fits the latter. One of Peckinpah's best.

Thanks for making it easier for us non-blogspotters to comment.