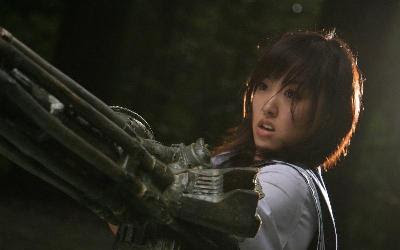 So, a little back story on this one: sometime last year my brother found the trailer for this movie online and we both thought that it was a parody or something and then discovered that it was an actual, bona fide movie and became determined to find some way to see it. Having now had the opportunity to see it, I must confess that words aren’t really adequate to properly describe it, but I’m going to do my best to apply a few. I haven’t bothered to assign this a star rating because movies like this one really defy the concept of a star rating, being as it is so shamelessly and awesomely ridiculous.

The plot of Machine Girl... actually, let me back up a bit. There’s something you need to understand about Machine Girl before we even get into the plot. She is pissed off. I mean, really pissed off – like, imagine the most pissed off you’ve ever been and then multiply it by about a million. She’s also lost an arm and had a machine gun fashioned to fit over the stump, leaving her other hand free to wield another weapon. These facts we learn in the prologue but then the film doubles back, showing Machine Girl (aka Ami, played with admirably manic energy by Minase Yashiro) in a simpler time... kind of.

Ami and her brother are orphans, their parents having killed themselves following allegations of murder. The Ami of these early scenes is kind and caring, just as long as you don’t get her angry (you wouldn’t like her when she’s angry). Unbeknownst to her, a group of bullies has singled out her brother and his friend, and eventually torments them to death. When it becomes apparent that the bullies won’t be punished, Ami decides to take matters into her own hands and make them pay. During her quest, she loses her arm and almost dies but is saved by Miki (Asami) and her husband, the parents of the other dead boy. After several bloody battles, Ami and Miki storm the compound of the ringleader of the bullying, a little psycho who, judging by his parents, comes from a long line of psychos.

Machine Girl isn’t for everyone, but it might be for you if any of the following apply:

1. You like every wound to result in a fountain of spurting blood;
2. You’re curious regarding the aesthetic appeal of a bra fashioned out of drills;
3. You’ve ever wondered what it would look like if someone vomited up their intestines;
4. The words “flying guillotine” capture your imagination.

A lot of blood is shed in this film, but the violence is of such a cartooney variety that it’s difficult to take seriously. And lest you think the film is entirely devoid of cinematic value, rest assured that there is a moral to this story, voiced by Machine Girl in the final moments, regarding the importance of standing up for yourself or some such thing. At any rate, if simply standing your ground doesn’t work the film does have many creative suggestions for inflicting bodily harm on your enemies.

I absolutely loved this movie, it was just so much fun. I actually came very close to putting this one my top 10 of 2008 because of just how much ridiculously awesome fun it was.

I got to say that this is not the kind of film that I watch in order to appreciate it the way I would. Anyway, I thought that the film was less mindless than - let's say - Kung Pow (yes, I'm guilty of charge for having seen it with my cousins). In fact, what The Machine Girl doesn't have in terms of script and performance quality, it makes up for it with its action scenes that are nonetheless entertaining (and awesomely ridiculous at the same time).

I have to say that your review is far more entertaining than the movie appears to be. A most amusing piece of writing. I read somewhere recently that writing only about movies you like leads to complacency, that we need to write about movies we don't much like once in a while to keep our minds sharp. I'd say this review is a good illustration of that thesis. Most enjoyable.

@R.D.: Thank you, althought it's not so much that I didn't like the movie as it is that whatever enjoyment I did get came more from the experience of watching it with other people. On its own, it's just a ridiculous and violent movie, but when you're watching it with someone and snarking back and forth about it, then it's a lot of fun. It's definitely not the kind of movie I would normally gravitate towards.

The tempura coated arm had to be one of my favorite scenes. Rick nailed it with "ridiculously awesome fun."